Everything That Rises Must Converge

By Callie Oettinger | 10 Comments | What It Takes

The rain drops picked up speed as I headed west along the highway.

They hit the windshield, hesitated, and then sought each other out, going from individuals to a series of streams flowing upward— until the wipers arrested their development, cleared the deck, and new drops hit and started up again. A drop, a hesitant movement—Which way up?—and then convergence. 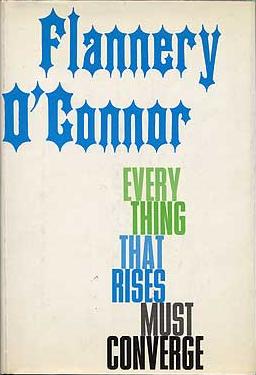 And Flannery O’Connor’s “Everything That Rises Must Converge” title landed in my head.

Earlier in the week, Steve shared a project on which he was working, a few days later he and I received two separate e-mails, one from a friend, another from a stranger, with messages that related to the project. Neither the friend nor the stranger knew about the project.

And then there was my drive and the rain and Flannery O’Connor popping in to sort things out—and before Flannery, there was Pierre Teilhard de Chardin:

“Remain true to yourself, but move ever upward toward greater consciousness and greater love! At the summit you will find yourselves united with all those who, from every direction, have made the same ascent. For everything that rises must converge.“

Flannery pulled the last line from a section of Chardin’s “The Omega Point” to title her collection of short stories.

I don’t share the religion from which Chardin’s thoughts evolved, or which Flannery incorporated into so much of her work, but I can’t help but embrace the concept that everything that rises must converge.

Those rain drops . . . There was something to them. As the minutes on the road stretched into hours, my mind wandered. The windshield became the flat plane of an alternate universe, and each drop was the track of a different person, hitting, wavering, then rising and converging—or being knocked off the map. And I was the outsider, watching, waiting, testing, holding the wipers as long as I could, changing their speeds, watching the difference between the hard rain a fallin’ and the “spit” kicked up off the road by tractor-trailers, long after the rain had stopped.

How many times have you had an idea, and knew there was something to it? Something bigger, something you had to act upon, but dropped it? And the idea, so vibrant, with hard-to-miss Technicolor outlines already giving it shape, made you skip a beat, jump, smile—and you still let them go.

I’ve had those ideas. Many have drifted like a pleasant dream—one I’ll always remember as good, even if I can’t remember what it was about.

Some I acted upon and the wiper came and knocked them out. Didn’t work. I moved on. But the ones that worked… There’s always been that convergence. When I questioned, hesitated for a second like a new drop on a windshield, someone or something else came along and joined me going toward the top.

I don’t know how to control it—what the difference is between the drops that make it up and the ones that are wiped off. Closest I can tell, the ones that make it on my car are the ones that landed with the greatest volume, and start toward the top. Perhaps those are the more fully-formed ideas. Or, in some cases, perhaps there’s a bit of luck involved.

The one thing I know is that there is convergence and it came together last week.

I can’t tell you the steps—other than that sometimes, letting those ideas rise, like a balloon released from the grasp of a child—without a plan, sometimes on accident, just seeing where they will go—works. And once it’s up, there’s work keeping it afloat, moving up long after the helium has seeped out and the idea has to rise on its on merits. But when it gets there . . . It’s a welcome breeze on a hot summer’s day at the beach, miles of new powder on a pristine ski slope, the first run of a child who is barely able to walk. It’s all those good things coming together, the cream at the top.

Eventually . . . Everything that rises must converge. Just keep it rising. . .