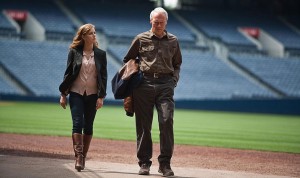 Mickey listens to her father’s comments about the high school ball player, then goes to the fence for a closer look. She returns to tell Gus, her father, that he was right. The young player’s “hand’s drift.”

“How did you know that if you can’t see him?” she asks Gus, whose failing vision is as clear as sludge.

“Because I’ve been in this business too damn long, that’s why.”

“It’s the sound you hear. It’s like a ball coming off the bat, or exploding into a glove. It’s a pure sound. You’ll know it when you hear it.”

The dialogue above is from Trouble with the Curve, starring Amy Adams as Mickey and Clint Eastwood as Gus. I know the sound they’re talking about.

That pure sound—it comes when you’re doing it right. It’s the one measurement that can’t be faulted.

I’ve heard it at the driving range. There’s that crack when Big Bertha launches a ball across the green—like an anvil hitting the high note on a set of titanium chimes.

And there’s a feel to it, too.

I competed in 200 meter butterfly for years as a kid. There’s a sound in the water—a tha-thumb sound—of your arms piercing through, your body following, and then the second beat of your legs pushing down on the water, propelling your arms and body back out. It’s the heartbeat of the stroke. It’s how you know you have it right. Without it, you need to push harder, adjust the reach of your arms, power through your shoulders, and push yourself through the water with all you have from your legs.

And that sound and feel extend beyond sports.

There’s the sound and the feel of a book, the rhythm of the words that make the difference between a page turner and a slow read. There’s a beat.

And then beyond those books, there’s a feel and a pure sound to the sharing of it, too.

This past week, Conan O’Brien spoke about integrating products into his program. He shared two examples of things that worked for him. (View the examples here.) The comments he made behind the “Why do these work?” question is worth a read:

“The grassroots nature of the movement that rescued me when I was in so much trouble a couple of years ago, that was so pure—I had nothing to do with it. It was an online rescue by younger people who said, ‘We like this guy. We don’t like what happened to him.’ And they created this movement that swept me through a tour and then took us to TBS. That was so real. And it was always very important to me that we not screw with that. I’d rather stop doing it than continue to do it in a way that starts to become manufactured or fake.”

There are many ways to share your work. And if you’d like, you could hack the system and speed up your attention-getting machine. You could leak a story. Lie about a story. Spin a story in a sensational way that would garner you attention.

OR, you could do something that’s not all about you receiving attention.

Bottom line: If you want an audience that will rescue you (should you ever need it)—and create a movement in your name—your actions have to be about more than you.

You need that pure sound—the crack, tha-thumb, whatever it is—which comes from doing things right. In this case, “right” involves interacting, respecting, and giving back to your readers, viewers, etc. , too. You’ll know when you nail it because they’ll let you know. They’ll sound it out for you.