How I Learned Hebrew

Back at the hotel a few nights later, after a second interview with Ran Ronen, a legendary fighter pilot and commander in the Israel Air Force. Danny is making coffee and toasting two-day-old bagels.

“We gotta have an ops meeting.” 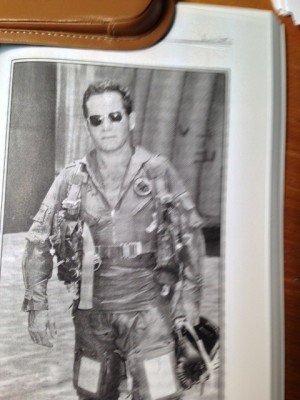 Ran Ronen as a brigadier general in 1983.

An operations meeting is a meeting to plan combat action, to lay out a flight mission. We’re at Day Seven, Danny and I, of a three-week blitz of interviews. But we haven’t decided yet who I’ll interview over the next two weeks and why. Danny needs to know because he’s the one making the phone calls. He has to convince the individuals to meet with me—and then set up a time and place.

He and I have to sit down now and figure out a plan for the next fourteen days.

Danny flops onto the couch with bagels, cream cheese, and two mugs of single-malt Scotch. His question is, “What’s our kavanah?”

Kavanah, Danny has taught me, is “intention.”

This is different from matarah, “objective.”

Today we were talking to Ran Ronen, right? He was telling us about leading the attack on Inshas Air Base near Cairo on 5 June 1967. His orders were to “destroy the runways and as many enemy planes as possible.”

That was his objective. His matarah.

But the kavanah, the intention, is one level above that.

The kavanah that day was “achieve air superiority.”

In other words, if for any reason Ran could not have achieved his matarah of attacking and destroying Inshas Air Base, he could have made the mental jump to his kavanah—“achieve air superiority”—and improvised in the moment, perhaps leading his planes to attack a different air base (or radar stations or anti-aircraft batteries.)

“Okay,” I say. “I’ll lay it out, Danny. I’ll explain my kavanah for these next two weeks. Then we can talk about each individual day and its matarah.”

Danny has taught me one other word in Hebrew.

Balagan means “chaos.” Technically the term is derived from Russian, but it has been absorbed intact into Hebrew.

Balagan is the most important word you’ll learn here, Steve. If you can understand this, you will understand Israel. And you’ll know why the IAF and IDF are so good.

A Jew by nature, Danny says, understands a balagan. A Jew is happy in a balagan. “Think about it. What skills do you need in a situation of chaos? Chutzpah. Imagination. The ability to improvise.”

I’ve been working with Danny for less than a week but already a dynamic has established itself between us. I’m the clueless American Jew. I know nothing. I would spread mayonnaise on a bialy if no one stopped me.

Danny is my rabbi.

He will bring me up to speed on all matters pertaining to the Jewish warrior and to being a Jew, period.