How does the Western Wall fit into my life? Why should I care about it?

I don’t know. I’m wondering, now, as Danny and I approach the great plaza. 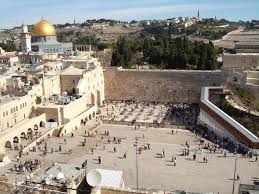 The Western Wall Plaza today. The Dome of the Rock, third holiest site of Islam, is at left atop the Temple Mount, of which the Kotel--the Western Wall--is a retaining wall.

Above the Dung Gate, you pass through a checkpoint. Ultra-Orthodox men and women stand with their palms outstretched as you go by. Among the haredim being poor is evidence of one’s devotion to God. You must beg alms because you have given your life over to study of the Torah.

We’re through the security barrier now, walking up the slope to the Western Wall plaza. The Kotel is on the right. You can see it from a distance. It’s big. Sixty or seventy meters across and ten meters high. The stones are called ashlars. They’re huge. How the ancient Israelites wrestled them into place I have no idea.

The Western Wall is not the surviving wall of Solomon’s temple. It’s humbler than that. It’s the retaining wall that supports the elevated mount, called by Jews the Temple Mount, upon which Solomon’s temple once stood.

Titus’s legions razed the temple to the ground in 70 BCE. Why? Because the stiff-necked Jews would not accede to Roman rule. The last rebel remnant held out atop Masada, the natural fortress near the Dead Sea. When the Romans erected siege works and were within hours of overwhelming the defenses, the Jews on the summit, to the last man and woman, took their own lives.

The Romans depopulated Israel. They drove the Jews out and set them on the course of exile.

That was the start of the Diaspora. For almost two thousand years, until the founding of the modern state of Israel in 1948, the Jewish people have had no country. They have dwelt as exiles and strangers in the lands of others.

I can see the Wall clearly now. There’s a help-yourself table with kippas—yarmulkes—in case you want to put one on to approach the Wall. I do.

Around the plaza are numerous offices of religious societies and charities, built of white Jerusalem stone, rising three or four stories above the square. I check my watch. Time is about four in the afternoon. There are maybe a couple of hundred visitors, half in black Orthodox garb, half like me in civilian dress.

Six months later, when I interviewed Yoram Zamosh (who as a company commander of paratroopers was among the first Israelis to reach the Western Wall on 7 June 1967), he expressed his feelings this way:

Think about your own Vietnam War Memorial in Washington, D.C.

You stand before it. It evokes a powerful emotion, doesn’t it? I have been there myself and I was profoundly moved, though I am not an American and I have no personal connection to the losses your people suffered in Southeast Asia.

Our Wall is like that wall, except that it carries the emotion of two thousand years.

A wall is unlike any other holy site. A wall is a foundation. It is what remains when all that had once risen above it has been swept away.

A wall evokes primal emotion, particularly when it is built into the land, when the far side is not open space but the fundament of the earth itself. When one stands with worshipful purpose before the expanse of a wall, particularly one that dwarfs his person, an emotion arises that is unlike the feeling evoked by any other religious experience. How different, compared to, say, worshipping in a cathedral or within a great hall.

Danny has been to the Western Wall hundreds of times, but as I glance over to him, I see his face and posture change.

Am I feeling anything? I don’t know.

One approaches the Western Wall as an individual. No rabbi stands beside you. Set your palms against the stones. Is God present? Will the stone conduct your prayers to Him? Around you stand others of your faith; you feel their presence and the intention of their coming, but you remain yourself alone.

Are you bereft? Is your spirit impoverished? Set your brow against the stone. Feel its surface with your fingertips. Myself, I cannot come within thirty paces of the Wall without tears.

The ancient Greeks considered Delphi the epicenter of the world. This is the Wall to me. All superfluity has been stripped from this site and from ourselves.

Here the enemies of my people have devastated all that they could. What remains? This fundament alone, which they failed to raze only because it was beneath their notice. The armored legions of our enemies have passed on, leaving only this wall. In the twenty centuries since, those who hate us have defiled it and neglected it, permitted slums to be built up around it. This only makes it more precious to us. 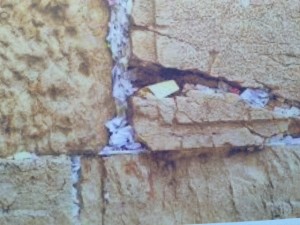 Prayers scribbled on scraps of paper are wedged traditionally between the stones of the Western Wall.

I have reached the Wall now. It’s not crowded. There’s plenty of room to approach. Danny has found a place and is praying. He’s the son of a rabbi so he knows what he’s doing.

I approach the wall. Between the cracks of the ashlars, the giant stones of which the wall is composed, are stuffed numerous prayers scrawled on scraps of paper. I scribble one too.

The stones are cool to the touch when you press your palms against them. These blocks have been here a long time. I’m not a religious guy. I’m an American. I have no real background in Judaism. I’m a bad Jew. But, pressing my forehead to the stones of the Wall, I feel something in my knees.

Zamosh said the experience is solitary. It is. For me it evokes no verses of scripture or even coherent thoughts. No quotable insights come. I don’t experience a flash that changes my life. But when I turn away from the Wall and cross to Danny to walk back up the slope, I find myself putting my arm around his shoulder.

Danny has lived in Israel for more than thirty years. He has probably been to the Wall five hundred times. Still I see something in his eyes. That same something is in my eyes too.

“Wanna go get something to eat?”

He puts his arm around me too.