How to Write a War Memoir (or any memoir)

I am dangling beneath my parachute. Gazing down from a height of 10,000 feet, knowing I am going to be killed in less than fifteen minutes, I feel great sorrow for myself. None of my fellow pilots who’ve parachuted into the Nile Delta has survived the encounter with the welcoming committee below, and I have no reason to think my fate will be any different. 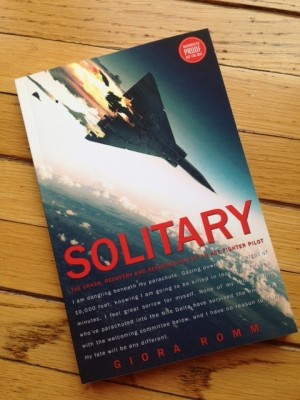 This is the first paragraph of the true-life memoir of Israeli fighter ace Giora Romm, titled Solitary, which was a best-seller in its original Hebrew under the title Tulip Four, Romm’s aircraft’s call-sign on the day he was shot down.

How do you write a war memoir (or any kind of true story)?

Tens of thousands of such tales have been published and no doubt thousands more are in the works right now. Veterans of Vietnam and Desert Storm, of OIF and Afghanistan have sought in countless manuscripts to tell their stories, to recount what they’ve done and witnessed and felt.

What makes a memoir work? Why do we read one and put another aside?

When you get down to about 2,000 feet, you can feel the ground approaching, and the rate of descent seems to accelerate with each passing second. The last part happens very fast. From about 100 feet above I can see that I am going to hit near a group of black-clad women who are shrieking in horror and trying to scramble out of the way. And then I hit the ground.

Within seconds, the first Egyptian villager is standing over me. Min inta? “Who are you?” he asks with much excitement. I ponder what answer will make him refrain from killing me—no easy task to gauge by the look on his face. The tumult escalates as more villagers press in towards me, shoving and yelling and trying to talk to me.

Who am I, then, at this moment?

The opening paragraphs of Giora Romm’s Solitary grip you. They suck you in.

But if you read them closely you’ll see that the deeper theme—the dimension that will elevate this narrative beyond “true war story” or “prisoner-of-war tale”—is already present.

Writers think in metaphors. To every event/character/narrative, they ask, “What does this stand for?”

Giora Romm was taken prisoner by his nation’s most bitter enemies; he endured a terrible ordeal; he was released; he returned to duty to command a fighter squadron. He led men into battle over the same enemy territory where he had been shot down, imprisoned, and tortured.

What does that mean?

What is it a metaphor for?

It is not enough, if you’re a warrior, to simply tell your story of war. The reader has read a thousand war stories. Nor does truth count. You get no points for “This really happened.” The warrior’s experiences, if their recounting is to hit home with the reader, must be evaluated on the same terms as fiction, meaning their narrative power and soul-relevance alone. 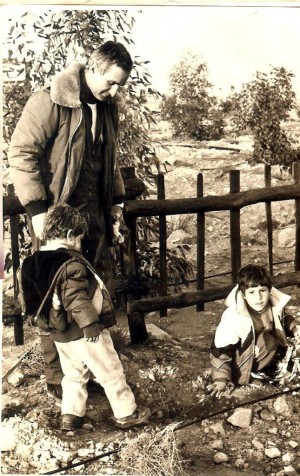 Giora Romm in 1983 with sons Assaf and Yuval

The Birdman of Alcatraz is a true story of imprisonment, as Giora Romm’s was. But Birdman can’t just be about a guy in a cell with a canary. It has to be about imprisonment as a metaphor. The fact of captivity must be addressed not only on the “action” level (where it would produce scenes of confrontation, brutality, etc.) but on the deepest emotional, psychological and spiritual planes.

The Birdman Robert Stroud’s literal captivity is experienced by us as a metaphor for whatever forces “imprison” us in our own lives. And his triumph via the humblest, most random happenstance—his nursing back to health of a wounded sparrow that had landed on the ledge of his cell window—resonates in our hearts as a path out of our own self-incarceration.

Giora Romm asked himself, What is my story about?

When I met him in Israel in 2013, I asked him what his process had been. Giora is not a professional writer and doesn’t claim to be. He simply understood on instinct.

Is my story about imprisonment, Giora asked himself.

Is that the metaphor?

Because the most important part of the journey happens after he’s released.

Flying again. Taking command of a squadron. Leading men into combat over the same part of the Nile delta where he was shot down before.

That was the real hell. That was the adversity in which he was even more alone than he had been in solitary confinement. That was the ordeal that impelled him to call upon his deepest interior resources.

The metaphor, Giora decides as a writer, is the inner war.

The story, he concludes, is about resurrection. Self-resurrection. Alone. Solitary. A shattering fall from a great height succeeded by a climb back through hell to reach, in an altered and entirely new form, not the place where he had once been but another station, unlike any he had experienced before.

This is how a writer thinks. It’s how Giora thought. It’s how a war memoirist (or any memoirist) must think, if he wants his story to succeed on levels beyond the superficial.

I asked Giora once, “How did you know to think that way, to write that way? Did somebody teach you?”

He laughed. “I just knew,” Giora said, “that I didn’t want to write one of those books that progressed through, ‘Then I did this, then I did that.’ I would have bored myself to death if I had written it that way.”