But we are in the middle of talking about something else, so the subject is momentarily shelved. Giora continues with his train of thought, describing his initial experience of combat, as a 22-year-old lieutenant attacking the Egyptian air base at Abu Suweir on the morning of 5 June 1967. (Giora’s plane is #2 in a two-aircraft formation. #1 is flown by a senior pilot, Eitan Karmi.) 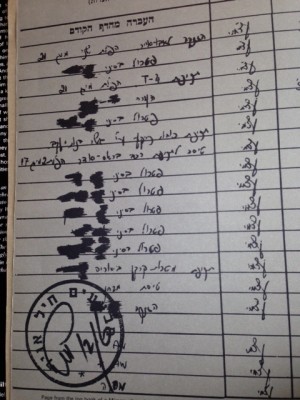 Giora Romm's logbook from the Six Day War. At the left edge of the page in Days One and Three the numeral "21" means "MiG 21," two downed on the first day, one on the third. "17" on Day Five means two MiG-17s shot down that day.

Descending through 10,000 feet, we can see the mess that the first wave of Israeli planes has made of the place. Columns of black smoke rise from all over the delta. Everywhere buildings and airplanes are blazing. I say to myself, Boy, our guys really did it.

Abu Suweir has a unique characteristic. The planes are parked in “eights,” meaning circular driveways, one adjacent to the other, to form what looks like a numeral 8. We start to descend, Karmi and I, and suddenly there is a MiG-21 taxiing. I have never seen this before. I go after him the way a child reaches out for a toy. I’m on his tail when Karmi, my leader, who is closing from 90 degrees, says don’t touch him. What? Okay. I follow orders.

Karmi goes in and shoots the MiG. He gets the kill.

I have only moments to feel the sickening feeling in my belly and then [the next wave of Israeli warplanes] appears [overhead]; they are attacking Abu Suweir and right behind them are two Egyptian MiG-21s.

MiGs are Soviet-built fighters. They fought Americans in Korea, Vietnam, and the Gulf War. The MiG-21 was state of the art in 1967, a Mach 2 fighter-interceptor, the best the Russians had. The word MiG comes from the names of the Soviets’ two top aircraft designers, Mikoyan and Gurevich. That’s what the “M” and the “G” are capitalized and the “i” is lower-case.

I go to full afterburner and in seconds I am behind the first MiG. I fire a burst and nothing happens, the only time this has ever happened to me. I don’t panic. I say to myself, Go closer. A hundred and sixty meters. On the gunsight, there is a circle we call it the diamond. When a MiG-21’s wingspan fits in that circle, the range is exactly 160 meters. I fire a short burst, a third of a second, and he immediately blows. I break fast, look back, the plane is a ball of flame. Now I see a second MiG. I line him up in my gunsights and put a burst into him. He explodes too.

At once everything has become very simple.

I say to myself, This is my role. This is what I was sent here to do. I am not concerned with the outcome of the war. I have just shot down two MiGs!

As I’m passing over the second MiG, I spot a third one, running west away from me. I’m thinking, Should I shoot him down too? Hello! You are Giora Romm, 22 years old, who was in the Boy Scouts only months ago. Don’t be such a greedy pilot!

Three years after this, Giora was shot down over Egypt, imprisoned and tortured, and held in solitary confinement for ninety days before being released in a prisoner swap. He wrote a book titled Solitary about that experience and the mental and emotional struggle to recover and return to full capacity in the aftermath.

Today he is a retired general, chief of Israel’s civil aviation administration. He lives with his wife Miriam (who was in combat in Sinai as a coder/decoder while Giora was flying the mission to Abu Suweir) in Savyon, a suburb of Tel Aviv.

Then finally to the subject: MiG killers.

In any fighter squadron, there are two kinds of pilots. One kind—and every flier in the squadron, and even the ground crews, knows exactly who this is—can be a great pilot, technically flawless, brave, resourceful and so on. But he will fly around all day in a sky full of MiGs and never shoot one down. Then there is another type of pilot. This type is a MiG killer.

I ask Giora if he was a MiG killer.

“What’s the difference? Why is someone not a MiG killer?”

I think they are missing a gene. I’m not being facetious. Nor am I offering a judgment. This is something that cannot be taught. No flight school in the world can inculcate this quality. You either have it or you don’t.

I ask Giora how this quality shows itself.

Say you are assigned to fly a combat patrol along the border. Some pilots will fly ten kilometers back from the line. They’ll take a defensive posture. Others will crowd right up to the last centimeter. If they see the slightest flash, they cross the border and nothing will stop them.

I was in a three-ship formation with two pilots who were far, far my seniors on the third day of the ’67 war. We were at 10,000 feet over the Sinai desert. Suddenly I saw a glint, way below.

What was I doing? I had no right to bolt from the formation, and certainly not to shout instructions to pilots who were ten years senior to me. But that is what it takes. I never thought twice and never looked back.