By Callie Oettinger | 5 Comments | What It Takes

For the past few weeks, Steve’s interviews with Jeff Simon have been appearing on this site. The last one ran just before Jeff’s Indiegogo campaign ended — fully funded I’d like to add (with a congrats to Jeff and Team Abercorn).

I shared a bit about his campaign via the post “Why You Need to Know About Crowdfunding,” with lessons from crowdfunding that crossover into outreach, for sharing our work.

A few additions to that piece:

Alexander Pope did it. Mozart did it. And . . . The “American Committee” (thank them for the base and pedestal of the Statue of Liberty) did it.

And, the three did it without the ease of a computer that could put them in touch with millions around the world.

Yes, they all had known names, but . . . Their outreach was similar to the word-of-mouth outreach that still starts at the local level today.

In Justin Kazmark’s article “Kickstarter Before Kickstarter,” you’ll find Mozart’s experiences in crowdfunding, as well as the stories of the other three:

In 1783, Mozart took a similar path. He wanted to perform three recently composed piano concertos in a Viennese concert hall, and he published an invitation to prospective backers offering manuscripts to those who pledged:

“These three concertos, which can be performed with full orchestra including wind instruments, or only a quattro, that is with 2 violins, 1 viola and violoncello, will be available at the beginning of April to those who have subscribed for them (beautifully copied, and supervised by the composer himself).”

Alas, not all projects reach their funding goals, and Mozart fell short. A year later he tried again, and 176 backers pledged enough to bring his concertos to life. He thanked them in the concertos’ manuscript: 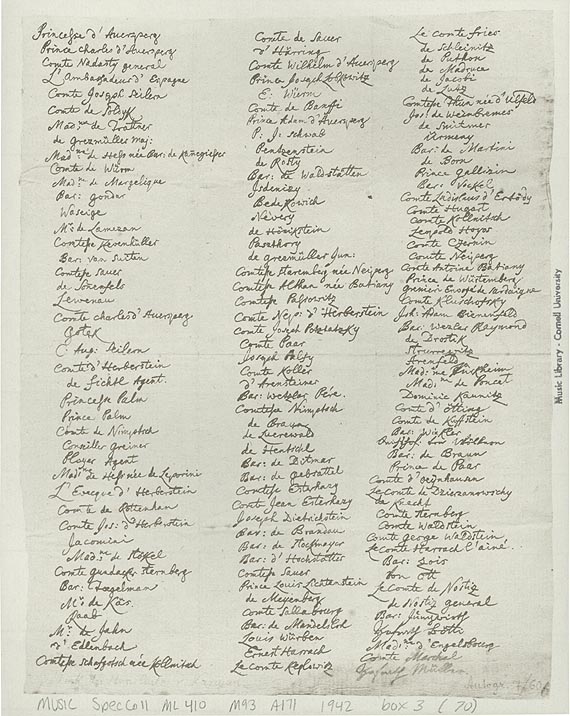 So, if you’re looking for other examples of crowdfunding that would work in the realm of outreach, to share your project, consider going local for examples. We don’t know how Mozart got the word out, but the image below offers a clue to what the “American Committee” did. 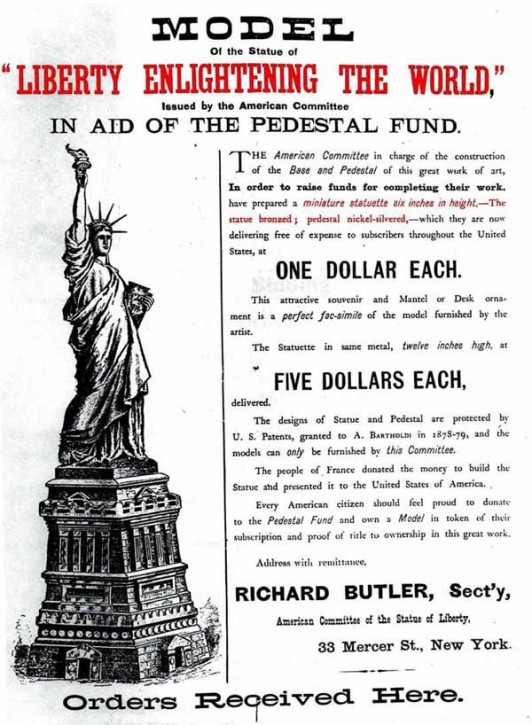 Look within your own community. What was picked up by your local news station or covered in your area’s business journal? What non-profit is a top fund-raiser? And why? What are they doing to reach people? How are they sharing their work/projects/initiatives/etc?

Earlier this year, PonoMusic, founded by Neil Young, raised over $6 million via its Kickstarter campaign, eclipsing its $800,000 goal. Now, it is offering “accredited investors” shares of the company, via Crowdfunder.

Not familiar with Pono yet?

Pono’s mission is to provide the best possible listening experience of your favorite music. We want to be very clear that PonoMusic is not a new audio file format or standard. PonoMusic is an end-to-end ecosystem for music lovers to get access to and enjoy their favorite music exactly as the artist created it, at the recording resolution they chose in the studio. We offer PonoMusic customers the highest resolution digital music available. PonoMusic is more than just a high-resolution music store and player; it is a grassroots movement to keep the heart of music beating. PonoMusic aims to preserve the feeling, spirit, and emotion that the artists put in their original studio recordings.

Why is this important?

In addition to offering the sound quality of the masters, its success will reinforce “quantity for quality” — encourage consumers to move in a multi-device direction (motivated by quality), thus helping to reverse the use of smart phones as one-size fits all containers for music, movies, photos, maps, games, you name it… More than one device (quantity) to obtain quality (PonoMusic).

Why is this reversal important? Without going down the entire Amazon/publisher rabbithole … The quantity for quality concept applies to buying, too. Consumers shop for convenience. Book publishers, as one example, reinforced that behavior for years, by 1) offering just a few buy links on their own sites (and encouraging authors to do the same on their author sites) and 2) not offering incentives for readers to buy books off of the publishers’ own sites. With ease, the publishers could undercut the discounts on Amazon and other sites, and offer better deals, maybe even subscriptions, and club pricing on their own sites. They could sell direct to readers. Instead, when Amazon doesn’t sell their books, the cut is deep.

About half [Douglas Preston’s] book sales used to come from Amazon. But since the retailer started discouraging orders, his paperback sales are down 61 percent and his e-book sales are down 62 percent. His last novel, written with Mr. Child and published by Hachette in November, was “White Fire.” A week before publication, 25,000 Amazon customers had ordered a copy.

Their new novel, “The Lost Island,” came out Tuesday. It had only a few thousand pre-orders, all made before Amazon lowered the boom on Hachette and stopped selling forthcoming Hachette books.

I like PonoMusic because Neil Young identified a problem and is setting out — as an artist and with other artists — to solve it, rather than relying on labels or other organizations to solve it for him.  The Amazon-publisher back-and-forth has been going on for years – long enough for publishers and authors to have developed their own sites into more effective places of commerce. Instead, they gave that power to Amazon, forwarding readers to the site.

The War of Art was under the Hachette unbrella up until a few years ago, when Steve and Shawn turned down the publisher’s contract to continue printing the book, instead launching Black Irish Books and publishing it themselves. If they’d kept on with business as usual, The War of Art would have been tied up in the Hachette/Amazon mess, too. Now, the print runs Black Irish produces are available via its store, while readers have the option of buying print-on-demand versions that are sold via Amazon and B&N.com. This insures that 1) books are available in different locations (with Steve making sure readers know about Black Irish) and 2) physical stock isn’t tied up in one location. According to Book Scan, between 600 and 2,200 copies of The War of Art have been sold per week in 2014 and just over 65,000 have been sold in the past 12 months (these numbers don’t include the copies sold via Black Irish) — all more than the book’s average per-week sales under the Hachette umbrella. (More on this in Steve’s own words, via an interview with Joanna Penn.) Black Irish also offers the same bulk sales to its individuals readers that it offers to bookstores purchasing its titles for retail sales.

I want to see PonoMusic reach its goals because I believe in the project, but I also want it to succeed because 1) it’s an example of what happens when artists join together to fill needs/voids/problems they see within their industries and 2) it will be a step toward reversing the “convenient path” we’re on. Convenience is a great thing, but it’s a double-edge sword. Diversity in how we buy and access products is needed – as is the need for artists to take charge.

Brendan I. Koerner’s most-recent article for Wired is about pediatric oncologist and cancer researcher Jon Olson, whose “laboratory has developed a compound that appears to pinpoint all of the malignant cells in a patient’s body. It gives those cells a bright fluorescent sheen, so that surgeons can easily spot them in the operating room.”

Because the compound’s main ingredient — found in the stinger of the deathstalker scorpion — “troubled the big grant-making organizations when he came to them for funding,” he turned to donations from individuals. Now, says Brendan, “Olson’s fluorescent scorpion toxin is now in Phase I clinical trials.”

Within the piece, Brendan shares Project Violet, which “offers a range of rewards for different contribution levels, much like on Kickstarter. For $100, donors can ‘adopt a drug candidate’ and then track its progress; for  $25,000 they can have dinner with Olson.” Except it isn’t set-up by Kickstarter or Indiegogo. The site is a go-it-alone crowdfunding site.

Why is this important?

Academics will tell you about the brutal fight to obtain research funding — and the academic nastiness (“intense ever since universities were founded in the Middle Ages“) that accompanies the fight.

Those within the fields of medicine/science can sidestep the squabbling and competition for funding and reach directly into the communities that would benefit from their research.

Brendan’s piece  touches on the ethics of a doctor going to his patients to raise money. I understand some of the concern. Afterall, what if a doctor was really only selling snakeoil . . . But . . . Everything about Dr. Olson and his work points in the opposite direction. (Watch his TedX talk).  As Brendan wrote,

Perhaps the ethical purists might feel rather differently if they, like [Jon Olson], had to walk around a pediatric cancer ward every day.

All the stories/experience/advice Steve and Shawn and I share on this site aren’t anything new. We’re not the first nor will we be the last. We’re just living in a time that makes it possible for artists to take control in ways they couldn’t in the past – to connect with individuals and communities around the world.

We’re in a time in which more artists can be their own solution (and in some cases, the solution for others, too). Mozart raised enough for his performance, Jeff raised over $100,000 for his web series, PonoMusic has raised over $10 million thus far between Kickstarter and Crowdfunder and Jon Olson has raised hope in addition to money, to help children and their families.

Different people, different projects, different periods. Common thread: They took action, rather than waiting for someone to do it for them.