“The Game of Numbers”

Last week we were talking about Rory McIlroy’s “trigger words” from his victory in the British Open a few weeks ago—“process” and “spot.” We were saying that the principle behind these concepts was equally applicable to writing and to entrepreneurship. 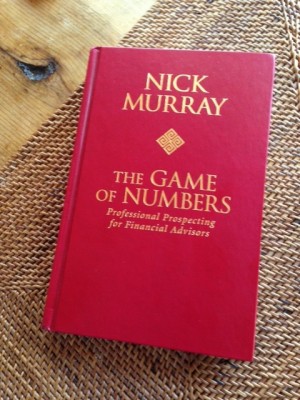 My copy of "The Game of Numbers"

What is that principle?

It’s the idea of detaching yourself emotionally from the ultimate outcome of any enterprise (“I gonna win the Nobel Prize!” “I’m going to humiliate myself in the eyes of everyone I love!”) and focusing instead upon one simple, controllable object (“I’m going to sit down this day and work for three hours.”)

I want to introduce you to a book that articulates this concept better than any I’ve ever read.

It’s called The Game of Numbers by Nick Murray.

The Game of Numbers is not about writing. It’s about “prospecting.”

Nick Murray is a guru and mentor to financial advisors. He writes a popular newsletter, as well as magazine articles and books. “Prospecting,” in the sense that Nick employs the term, means looking for clients. Cold-calling. It means approaching strangers and asking for their business.

Know that, for the purposes of this book, there are only two states of being [for a financial advisor]: prospecting and avoiding prospecting.

Is this starting to ring a bell? Hint: where Nick uses the word “prospecting,” substitute “writing.”

This is not a how-to book. It’s a how-to-not-stop book. Or, if you prefer, it’s not about prospecting; it’s about the fear of prospecting. And how to defeat that fear.

What I call Resistance, Nick calls Avoidance. There’s no difference between the two.

Any technique will work, so long as you relentlessly work it. It’s a numbers game. That is, success is a pure function of the law of large numbers.

What is Nick’s rule for prospecting/writing? It’s a lot like Rory McIlroy’s “process” and “spot.”

The rule is: Pick a constructive aim that you can control; then do it and keep doing it, regardless of immediate success or failure. In the end, the law of large numbers will kick in and you will win.

It’s critical to remember that those are what you’re going to count: approaches. An approach is a genuine attempt to start a conversation with someone which might lead to his enlisting our services.

The outcome of such an attempt is outside our control, and for that reason alone must not be how we keep score. The only thing we can control is the one thing we must learn to control, and that is our own behavior. What the person on the other side of the door does or says—or whether the receptionist will even tell him you’d like to see him, or even whether he is there at all—are variables beyond your control. There is only one thing you can control, and that’s whether or not you knock on that door. This is the only thing we count, because it is the only thing that counts.

For the young financial advisor seeking to develop a client base: Make five approaches a day. Don’t be discouraged if you get no clients today or tomorrow or for the next six months. At the end of each day, ask yourself one question only: “Did I make my five approaches?” If you did, you have succeeded. Simple as that.

This, I believe, is the supreme secret of successful prospecting: it doesn’t matter whom you prospect, how you prospect, or what you say. It only matters that you prospect, and never stop short of your goal. Everything else is just technique, and technique is nothing more than the refinement of your most fundamental prospecting beliefs and behaviors.

For the young writer: write your pages every day. Do not judge yourself or your work. At the end of the day, ask yourself one question only: “Did I do my pages today?” If you did, you have succeeded. Simple as that.

Then for both writer and financial advisor: Keep doing it.

What makes The Game of Numbers so valuable, in my opinion, is that Nick gets into excruciating detail about the psychological and emotional state of mind that’s necessary to successfully play this game. He gets into belief; he gets into behavior. He goes far more deeply into these than I did in The War of Art.

The Game of Numbers is not a motivational book or a self-help book. It was written for a readership of professionals, i.e. men and women whose livelihoods depend on seeking and finding clients. Hence the $40 price tag. The book was not written to be charming or to make the reader feel good. It’s a hard-core, no-nonsense work whose aim is to help the reader survive and prosper.

You can order it at www.nickmurray.com.

My bottom line (and I don’t mean to sound egomaniacal when I say this):

If there is a single book other than The War of Art that I would recommend to any writer or entrepreneur, The Game of Numbers is that book.