The Magic of Snow (and Emerging Stories)

By Callie Oettinger | 18 Comments | What It Takes

This piece hit about this time two years ago. Bringing it back today as the days grow longer and the snow days (hopefully) shorter.

Ezra Jack Keats clipped a strip of four images from Life magazine in 1940. One child. Four endearing expressions and poses.

As the next two decades passed, the little boy in the images remained the same age, with the pursed lips and ballooned cheeks so often worn by children no more than three years old. Bundled up in a long puffy jacket and pants, he lived on Keats’ wall as the artist illustrated one children’s book after another.

In 1962 the child left his static black and white life behind when he woke within the vibrant, adventure-filled pages of The Snowy Day, wondering where the snowball he’d tucked into his pocket the night before had disappeared. The sweetness, innocence, confidence and strength captured within the old images came alive within the book. He’d been given a name, too: Peter.

In 1963 The Snowy Day was awarded the Caldecott Medal.

Like reality TV editors, documentary film makers face real people and events. The difference—aside from topic—is found in the editing. Rather than forcing a story—frakenbiting—they help a story emerge. Often, the filmmakers start with one story in mind, only to emerge with another in the end.

“In publicity material for the film Sound and Fury, director Josh Aronson says that he initially intended to film five deaf individuals whose experience covered a range of viewpoints on deafness. But in his research, he discovered the Artinians, a family in which two brothers—one hearing, one not—each had a deaf child. This created an opportunity to explore conflict within an extended family over how to raise deaf children. In another example, filmmaker Andrew Jarecki was making a film about birthday party clowns when he discovered, through one of his characters, the story that he eventually told in his documentary, Capturing the Friedmans—that of a family caught up in a devastating child abuse case.”

When Another Story Emerges

According to the Ezra Jack Keats Foundation, Keats didn’t seek children’s books. They found him.

Unable to attend art school despite having received three scholarships, Ezra worked to help support his family and took art classes when he could. Among the jobs he held were mural painter with the Works Progress Administration (WPA) and comic book illustrator, most notably at Fawcett Publications, illustrating backgrounds for the Captain Marvel comic strip.

Ezra went into the Army in 1943, and spent the remainder of World War II designing camouflage patterns. After the war, in 1947, he legally changed his name to Ezra Jack Keats, in reaction to the anti-Semitism of the time. It was his own experience of discrimination that deepened his sympathy and understanding for those who suffered similar hardships.

Ezra was determined to study painting in Europe, and in 1949 he spent one very productive season in Paris. . . . After returning to New York, he focused on earning a living as a commercial artist. His illustrations began to appear in publications such as Reader’s Digest, the New York Times Book Review, Collier’s and Playboy, and on the jackets of popular books. . . .

One of his cover illustrations for a novel was on display in a Fifth Avenue bookstore, where it was spotted by the editorial director of Crowell Publishing, Elizabeth Riley. She asked him to work on children’s books for her company, and published his first picture book in 1954. . . . In an unpublished autobiography, Ezra marveled: “I didn’t even ask to get into children’s books.”

Making Sense of the Story

Like the documentarians, Keats pulled together two points from the raw footage of his life—when one story seemed dominate and then another emerged. One, a clipping of a child, and the other, a request for children’s artwork. On their own, not extraordinary—but together . . . From those two points, came a Caldecott Medal award-winning writer and illustrator, whose stories have delighted children—and their teachers and families—for over half a century.

Friends would enthusiastically discuss the things they did as children in the snow, others would suggest nuances of plot, or a change of a word. All of us wanted so much to see little Peter march through these pages, experiencing, in the purity and innocence of childhood, the joys of a first snow.

I can honestly say that Peter came into being because we wanted him; and I hope that, as the Scriptures say, “a little child shall lead them,” and that he will show in his own way the wisdom of a pure heart.

Whatever that impulse was to clip the strip from the magazine . . . He didn’t know it was Peter—or even who Peter was—but . . . When he reached that next dot, asked to not just illustrate—but also write—a book . . . That old clipping re-emerged, perhaps like muscle memory of being able to ride a bike after years without a foot on a pedal. Once you feel the balance, you can find it again within a few wobbles. When he started his own book, whatever led him to clip that strip, led him back to it—and thus to the inspiration for Peter in many books to come.

Earlier this week I volunteered in my daughter’s kindergarten class. The Snowy Day met me as I walked in the room. As a child I couldn’t verbalize why I loved it so much. Something about the snow, of knowing what it was to try to keep a snowball overnight in a jacket pocket, of warm baths and a hug from my mother after hours playing in the freezing cold. I didn’t know that adults considered the book  groundbreaking, one that some say is the first children’s book to include an African-American child as a hero. I was just happy to sit on the couch with Mom, turning the pages as she read.  It wasn’t until years later that time was spent learning of the author.

Just as amazing as the story of Peter’s inspiration is the story of the artwork itself. Also from Keats’ Caldecott acceptance speech:

I had no idea as to how the book would be illustrated, except that I wanted to add a few bits of patterned paper to supplement the painting.

As work progressed, one swatch of material suggested another, and before I realized it, each page was being handled in a style I had never worked in before. A rather strange sequence of events came into play. I worked—and waited. Then quite unexpectedly I would come across just the appropriate material for the page I was working on.

For instance, one day I visited my art supply shop looking for a sheet of off-white paper to use for the bed linen for the opening pages. Before I could make my request, the clerk said, “We just received some wonderful Belgian canvas. I think you’ll like to see it.” I hadn’t painted on canvas for years, but there he was displaying a huge roll of canvas. It had just the right color and texture for the linen. I bought a narrow strip, leaving a puzzled wondering what strange shape of picture I planned to paint.

The creative efforts of people from many lands contributed to the materials in the book. Some of the papers used for the collage came from Japan, some from Italy, some from Sweden, many from our own country.

The mother’s dress is made of the kind of oilcloth used for lining cupboards. I made a big sheet of snow-texture by rolling white paint over wet inks on paper and achieved the effect of snow flakes by cutting patterns out of gum erasers, dipping them into paint, and then stamping them onto the pages. The gray background for the pages where Peter goes to sleep was made by spattering India ink with a toothbrush. 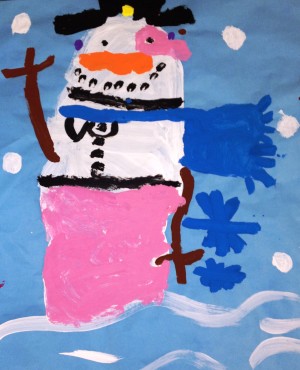 There’s magic in the snow.

Maya Angelou said, “There is no greater agony than bearing an untold story inside you.” The one thing greater is clinging to the wrong story—whether in your book or in your life. I’m glad Keats let his art roll to where it emerged instead of forcing it where he thought he wanted to be.

As I watched the five and six year olds in my daughter’s class paint their own snowmen, I gave up on keeping the paint off of their clothes and the floor and focused instead on the work itself. Keats was right. There’s a magic in snow, especially when it is paired with a child—and there’s an even greater magic in seeing the creativity that emerges.