I was watching True Grit the other night, the 2010 version with Jeff Bridges as Rooster Cogburn. A couple of weeks earlier I had revisited Paper Moon, one of my all-time faves, with Ryan O’Neal and Tatum O’Neal. 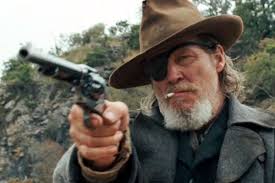 True Grit and Paper Moon are basically the same movie.

The key is in the Inciting Incident.

Let’s continue, then, our exploration of the Inciting Incident and how it works to infuse a story with power and narrative drive …

The story’s climax is embedded in the inciting incident.

Last week we talked about the two narrative “poles” that are set up the instant the inciting incident appears.

The first is the incident itself, in which the hero acquires his or her intention–the life-and-death impulsion that will propel him/her through the story.

The second is the as-yet-to-be-revealed resolution of this intention.

Will the hero get what she’s after?

What will we learn as we watch her struggle?

Let’s consider True Grit and Paper Moon and see how the climax of each story is embedded in the inciting incident.

The inciting incident of Paper Moon is when nine-year-old Addie Loggins (Tatum O’Neal), who has just lost her mother, is sitting across a Kansas cafe table from Moses Pray (Ryan O’Neal), a traveling flim-flam man who knew her mom and who bears an uncanny resemblance to Addie herself.

Just because a man meets a woman in a bar room,

that don’t mean he’s your pa.

Number One: Addie, we now know, wants Moses to be her father (she has acquired her intention) and she wants to be with him.

Number Two (which we don’t yet know); Will Moses turn out to be Addie’s pa? Will they stay together? How will this happen if indeed it does?

These questions will pull us powerfully through the story.

I won’t ruin the climax for you if you haven’t seen it or read it yet, but suffice it to say, all questions are answered in a wonderfully warm and satisfying way.

The climax of Paper Moon was embedded in the inciting incident.

In True Grit, fourteen-year-old Mattie Ross (Hallee Steinfeld) in post-Civil War Arkansas has just lost her dad—murdered by the outlaw Tom Chaney (Josh Brolin) who has fled into Indian territory. Seeking justice, Mattie hires U.S. marshal Rooster Cogburn (Jeff Bridges) to track the malefactor down and bring him back to be hung.

The inciting incident is when Rooster agrees to take the job—and allows Mattie to come along.

Why is this the inciting incident (and not, say, the moment when Mattie acquires the intention to hunt down Tom Chaney?) Because True Grit, like Paper Moon, is about a young girl’s quest for a father or a father figure.

The intention that Mattie acquires that propels the story forward (in addition to, and superseding, her intention to bring Tom Chaney to justice) is the intention to find a new dad or surrogate in the form of Rooster, the wild and wooly marshal who possesses “true grit.”

Again, I won’t spoil the ending for you except to say that, as in Paper Moon, child and man find a bonding moment that lasts lifelong.

Again, the climax is embedded in the inciting incident.

Again the questions put forward by the inciting incident—will Mattie and Rooster bond with each other as “dad” and daughter? How? What will it mean?—are what pull us in the audience through the movie.

Both these books/movies are love stories and as such they follow the convention that the “couple” must break apart before they can be ultimately united in the end.

In Paper Moon the darkest moment comes right before the finish.

I told you I don’t want you riding with me no more.

True Grit gives us Jeff Bridges in this moment at his growly, boozed-up best.

goose chase by a harpy in trousers and a nincompoop.

You, sister, may go where you will. Our engagement is

terminated. I bow out.

When we begin to think of ourselves as professional writers, we set about studying stuff that works. How does Charles Portis (who wrote the book, True Grit) do it? How did the Coen brothers make the movie work? How did Paper Moon, by Joe David Brown, work so well? How did Alvin Sargent and Peter Bogdanovich structure the movie script to be so effective?

The next step of course is applying these principles to our own stuff.

Do we have an inciting incident?

In that moment, does the hero acquire his or her intention?

What is that intention, i.e. the first “narrative pole?”

What is the second pole, i.e. the story’s climax?

Is the climax embedded in the inciting incident?

These are not academic questions. They are the soul and sinew of storytelling and the architecture of the books and movies you and I are trying to write.

We need to teach ourselves this stuff and learn how to apply it.

Next week: the Inciting Incident must always be on-theme.