The Second Act Belongs to the Villain, #2

I learned this from my friend Randall Wallace (“Braveheart”), who learned it from Stephen Cannell, the maestro of a thousand plotlines from The Rockford Files to Baretta to 21 Jump Street. 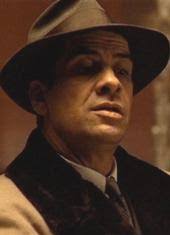 Al Lettieri as Virgil “The Turk” Sollozzo in “The Godfather, Part One”

What Steve Cannell meant was not that the second act should be packed with scenes of the villain twirling his mustache or plotting in his lair. He meant bring the villain’s effects on the heroes into the foreground and keep them there.

Because the havoc and jeopardy incited by the villain energizes the story and keeps it powering forward.

The villain in The Godfather (at least the personified individual) is Virgil “The Turk” Sollozzo (Al Lettieri). Remember him? He’s the gangster who comes originally to Don Corleone (Marlon Brando) with the proposal that the Corleone family finance his nascent heroin business. Brando turns him down.

This is the inciting incident of The Godfather.

This moment with Sollozzo comes right at the start of Act Two (in other words, exactly where Steve Cannell would want it to come.)

What happens now as this second act unfolds?