What I Love About Seth Godin

What I love about Seth Godin is that every time he pitches a new idea to a big company, they throw him out on his butt. “That’s the craziest thing we’ve every heard. It’ll never work, you’re nuts, get the hell out of here!” 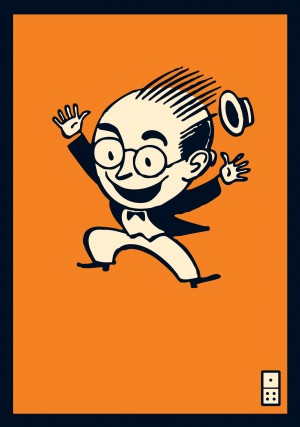 Poke The Box. Note Seth's unique style: no title on the cover.

Then Seth goes out and does it himself and sells a gazillion copies.

[Full disclosure: I’m now in business with Seth, in a new publishing entity of his called the Domino Project, partnered with amazon.com.  The first publication came out yesterday, authored by Seth, a manifesto called Poke the Box

What we can learn from Seth

If you’re a reader of this blog, you’re probably a lot like me. You’re a writer or an artist or an entrepreneur who’s trying to figure out how to a) do your work without compromising its integrity, and b) get it noticed in this crazy new world where everything’s free and nobody knows what’s going to happen from one month to the next.

If there’s any one person who does know how to navigate this nutty new world, it’s Seth.

Another thing we can learn

The other thing I love about Seth is that he has failed at a boatload of ventures. Seth has started publishing companies, internet companies, high-tech companies. How many have crashed and burned? Lots. But before the flames have even been extinguished, Seth has generated another idea and he’s off to the races.

Poke the Box is about that. It’s about starting. Not talking, not dreaming, not planning. Starting and doing. Finishing and shipping.

Poke the Box is an 84-page one-two punch–half kick in the ass, half cheerleading encouragement.

Seth’s message, in a nutshell, is this:

Switch from the slave mentality to the entrepreneurial mentality.

He believes that we have no choice any more. The world is changing in ways that will leave us behind if we don’t learn to function, at least partially, as artists and initiators.

Is the Domino Project the future?

Movie studios have a business model that looks like this:

On the lot (or off) at Warner Bros. or Paramount or Universal are the offices of various producers. These producers are not employees of the studio. Rather, they each “have a deal” at the studio. The studio pays these producers’ rent and gives them a fund for development, meaning the acquisition of screenplays or ideas that will become screenplays under the supervision of the producing entity. In return, the producer gives the studio a first look at any project he’s working on. If the studio likes the project, it has the right to acquire it and make the movie with that producer. Jerry Bruckheimer has a deal at Disney. Clint Eastwood works with Warners. The studios obviously want to align themselves with proven talent, with moviemakers who can pick exciting projects and make them into boffo flicks.

Amazon is making the same bet with Seth.

Seth is Clint Eastwood. He’s Jerry Bruckheimer. He will find, commission or otherwise bring in properties of a certain type from various writers of his choosing.  (My project will be published 4/20 … I’m sworn to secrecy at the moment as to its subject matter, except to say that if you liked The War of Art, you’re gonna love this new one.) Amazon will then “make the movie.” No one else will have it. It won’t be in bookstores; it won’t be anywhere else on the web.

Is this a model for the future?

Will a thousand Seths bloom, bringing in thousands of other writers and artists? Or will others challenge this new system? Will Wiki or guerrilla formats evolve?

Is the Domino model a form of liberation for writers and artists? Will it emancipate them from the current gatekeepers?

Or is it only a sideshow? Will its payoff top out at ten percent of the market? 0.10 percent?

What about the music industry? Will its model evolve along similar lines? Will iTunes become the 600-pound gorilla?

The only thing I know for sure is that, whenever the dust settles, into whatever form it finally settles, Seth Godin (and others who think like he does) will have already moved on to whatever’s coming next.