Jung was a student of myths and legend and of the unconscious. He discovered and named the Collective Unconscious, meaning that part of the psyche that is common to all cultures in all eras and at all times. 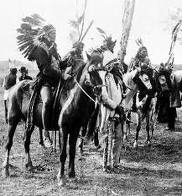 The Warrior Archetype takes many forms in many different cultures

The Collective Unconscious, Jung said, contains the stored wisdom of the human race, accumulated over thousands of generations.

The Collective Unconscious is the software we’re born with. It’s our package of instincts and pre-verbal knowledge. Within this package, Jung discovered what he called the archetypes.

Archetypes are the larger-than-life, mythic-scale personifications of the stages that we pass through as we mature. The youth, the lover, the wanderer, the joker, the king or queen, the wise man, the mystic. Legendary tales like that of King Arthur and the Knights of the Round Table are populated by archetypes. Movies are full of archetypes. Even a deck of cards has archetypes: king, queen, joker, jack.

Archetypes serve the purpose of guiding us as we grow. A new archetype kicks in at each stage. It makes the new phase “feel right” and “seem natural.”

One of the primary archetypes is the Warrior. The warrior archetype exists across all eras and nations and is virtually identical in every culture.

Siegfried. Another incarnation of the Warrior Archetype

In their book King, Warrior, Magician, Lover, authors Robert Moore and Douglas Gillette tell us that the human individual matures from archetype to archetype. A boy, for instance, evolves sequentially through the youth, the wanderer, the lover, the warrior, through husband and father to teacher, king, sage and mystic.

The warrior archetype clicks in like a biological clock sometime in the early to mid-teens. We join a gang, we try out for the football team, we hang with our homies, we drive fast, take crazy chances, we seek adventure and hazard. That’ll change later. When the husband/father archetype kicks in, we’ll trade in our 500-horsepower Mustang and buy a Prius. But not yet.

For now, the warrior archetype has seized us. Something inside us makes us want to jump out of airplanes and blow stuff up. Something makes us seek out mentors—tough old sergeants to put us through hell, to push us past our limits, to find out what we’re capable of. And we seek out comrades in arms. Brothers who will get our backs and we’ll get theirs, lifelong friends who are just as crazy as we are.

Moore and Gillette say something further. They state that the experiences and wisdom we accumulate under one archetype become the foundation for all the succeeding archetypes.

In other words, the lessons we learn are not wasted. The virtues we acquire during our time in the warrior archetype we can use when we mature into the husband and father, the mentor, the king. We get to keep them—and profit from them—our whole lives.

Alexander in India encountered some gymnosophists (literally “naked wise men”) yogis, sitting in meditation in the sun on the banks of the Indus. Alexander’s party was trying to get through the busy street, but the yogis had their spot and they wouldn’t move. One of Alexander’s zealous young lieutenants took it upon himself to chase the holy men out of the king’s path. When one of the wise men resisted, the officer started verbally abusing him. Just then, Alexander came up. The lieutenant pointed to Alexander and said to the yogi, “This man has conquered the world! What have you accomplished?” The yogi looked up calmly and replied, “I have conquered the need to conquer the world.”

At this, Alexander laughed with approval. He admired the naked wise men. “Could I be any man in the world other than myself,” he said, “I would be this man here.”

What Alexander was acknowledging was that the yogi was a warrior too. An inner warrior. Alexander looked at him and thought, “This man was a fighter when he was my age. He has taken the lessons he learned as a warrior dueling external enemies and is turning them to use now as he fights internal foes to achieve mastery over himself.”

Chapter 30   The Hardest Thing in the World

The hardest thing in the world is to be ourselves.

Who are we? Our family tells us, society tells us, laws and customs tell us. But what do we say? How do we get to that place of self-knowledge and conviction where we are able to state without doubt, fear or anger, “This is who I am, this is what I believe, this is how I intend to live my life”?

How do we find our true calling, our soul companions, our destiny?

In this task, our mightiest ally is the Warrior Ethos.

Directed inward, the Warrior Ethos grounds us, fortifies us and focuses our resolve.

As soldiers, we have been taught discipline. Now we teach ourselves self-discipline.

As fighting men and women, we have been motivated, commanded and validated by others. Now we school ourselves in self-motivation, self-command, self-validation.

The Warrior Archetype is not the be-all and end-all of life. It is only one identity, one stage on the path to maturity. But it is the greatest stage—and the most powerful. It is the foundation upon which all succeeding stages are laid.

Let us be, then, warriors of the heart, and enlist in our inner cause the virtues we have acquired through blood and sweat in the sphere of conflict—courage, patience, selflessness, loyalty, fidelity, self-command, respect for elders, love of our comrades (and of the enemy), perseverance, cheerfulness in adversity and a sense of humor, however terse or dark.

[This concludes the text of The Warrior Ethos. We’ll wrap it up next Monday with the Bibliography and a summing up. To read from Chapter One in sequence, click here.]