Seth Godin on the Domino Project

By Steven Pressfield | 11 Comments | Do The Work Wednesdays, Writing Wednesdays

The Domino Project is a partnership between Seth Godin and amazon.com, in which together they find, commission, edit, design, print, advertise, market and distribute a specific type of book/audio/eBook that Seth calls a “manifesto.” The first such piece, published two months ago, was Seth’s Poke the Box; the second, two weeks ago, was my Do the Work. 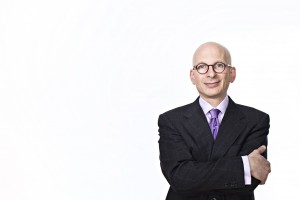 Seth and his best suit

In last week’s post, I offered my own befogged take on what the Domino Project is, what it represents, and what were some of the possible implications of this model for all of us artists and entrepreneurs going into the future. Continuing that thread, I went this week to the horse’s mouth. Herewith, five questions and a bonus query with Seth:

SG: In 1998, I pitched Jeff Bezos [the founder and CEO of amazon.com] on the idea of publishing books. After all, I said, that’s where the money is… when you sell what everyone else is selling, you make pennies. The publishers like bookstore competition, but they make dollars, not pennies, I said. I also pointed out that Amazon, alone among booksellers, knew who liked what. This was huge.

He laughed. He’s a good laugher. We shook hands and I went off to finish selling my internet company.

Five years later, I went back to Amazon to give a speech and pitched the whole room. Again, they weren’t ready.

I am persistent, but not stupid. I gave up.

Last year, tired of being a hypocrite (I had been writing about the demise of big publishers for a long time), I decided not to re-up with my publisher. I happen to like the people I worked with very much. Senior management at the publisher, though, has no vision and huge fear and were making the whole process harder to justify. So I left, with no plan.

Amazon isn’t a publisher, but they’re working with Domino to power our back end. It’s a unique relationship, one that’s working for both of us. I wouldn’t be surprised to see them doing this with others one day.

SG: At the same time distribution changed, so did reading habits. Basically: there are tons of substitutes. Smart people in search of information or entertainment have way more ways to find it than they did ten years ago … and attention spans are shrinking. The idea of sitting with a single book/idea for ten hours is harder and harder to peddle to most people, for good reason. There’s a lot to consume, and time on a single project is harder to justify.

So the idea of a manifesto is that it’s as long as it needs to be, but no longer.

This is the opposite of traditional publishing, where the publisher has decided that the unit of transaction is $20 and the length of the work is 250 pages. Your idea better be around that size, or they can’t really publish it comfortably.

I’ll add one more element: the only books that reliably become hits now are books that spread. Not books that are promoted, but books that are talked about. By readers. And that forward propulsion is a key element of a manifesto. It DEMANDS to be shared and spread, because it will make your life better.

SP: In your view, what is the connection between the abbreviated length of Poke the Box and Do the Work — and their manifesto content?  Would a manifesto in longer form not be as appealing? Or, looked at another way, does the short length dictate that only manifesto-like content will work?  (Like, say, a novel would not work at 100 pages—or a serious biography of FDR.)

SG: Again, I think it’s about appropriate length. Snow Crash was perfect as a novel. Some of the later Stephenson novels had the same number of big ideas but were three times as long. He lost me.

In the world of the Kindle, the length isn’t a contributor to perceived value. All I care about as a reader is, “Was I moved?”

You know, hundreds of thousands of readers later, no one has complained that either book (yours or mine) is too short!

SP: Are there other literary genres that would work in this 100-page form? Are you experimenting and evolving this project as it goes along?

SG: We don’t really care about 100 pages. One book we’re working on will be way way way shorter than that. Another is going to come in at 3x the length.

SP: Do you realize that you’re inventing a whole new product category that has never existed before? Was that the whole idea?

SG: Steve, I’ve been inventing new categories ever since I was sort of thrown out of/left business school. That’s the whole point, isn’t it?

SP Bonus question: Where is Domino going?  What’s the future?

SG: Build a permission base. Connect a tribe. Put on a show, one that’s worth spreading. Create souvenirs worth paying for while you spread ideas promiscuously. Repeat.