In the past year or so I’ve become aware of the verb “ask” used as a noun. I simultaneously like it and am appalled by it. It’s honest. Probably way too honest. 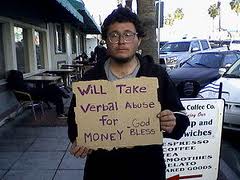 My problem is I like to think of myself as a nice guy. This is not good. I’m working on becoming more of a prick. There are people out there who are what I would call social sociopaths. They’re not actual murderers or criminals; they won’t hurt you. But, for whatever reasons of character or upbringing, they are utterly without empathy. They have no sense of the value of another person’s time or hard-won skill or hard-earned reputation. If you’ve got it and they can use it, they want it. They want it now. They want it free. And they want it again and again.

When you respond to an ask from one of these social sociopaths, expect no gratitude. Instead the initial ask will be succeeded by a follow-up ask, and if you’re dumb enough to respond to that, a third ask will appear hot on its heels. One guy wrote me out of the blue; I did a long interview for him, wrote a foreword for his book, and even gave him an intro to my agent. Finally he started asking for favors for his friends. This was an ask too far. When I said no, he wrote back: “I always knew you were a Hollywood asshole.”