Saying Yes and Saying No

A friend of mine said something to me a couple of years ago that, the more I think about it, the more profound it becomes. Let’s call her Jane. She’s a happily married woman with a couple of almost-grown kids and an all-around fine and healthy life; she was talking about the evening before she married her husband. 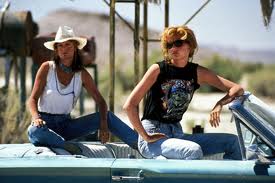 “The night before I married Mark was the worst night of my life. I tossed and turned all night, crying. I was literally sobbing. Because I realized that now I was never going to marry Steve McQueen or Paul Newman. It sounds ridiculous, I know, but the feeling was overwhelmingly sad. But here’s the point:

“When you go through one door—in this case for me, the door of marrying Mark—the act simultaneously closes all other related doors. When you say yes to one life, you say no to all others. As I walked through that door with Mark, it meant I would never walk through it with any other man.”

This truth is so obvious that sometimes we can’t even see it. I know that, when Jane put this into words, it hit me like a two-by-four between the eyes. I had never thought about it like that.

“Of course, the act of walking through that door with Mark made my entire life. It gave me the husband I love, the children I adore; it created the totality of the world that our family shares now and will share forever.”

What’s interesting to me about this dynamic is that, before we say yes and walk through that one door, all the doors standing before us are dreams. When we pick one door and walk through it, what’s on the other side becomes reality. To get to Reality A, we have to give up related Dreams B through Z. That’s hard. That takes guts.

But if we don’t do it, we’re left standing before Dream Doors A through Z and we’ve got no reality.

The movie business is like this. In the old days of the studio system, the so-called creative people—actors, directors, writers, etc.—were all under contract to the various studios. (Either that, or they were unemployed.) They did what the studios told them to. They were assigned to specific films. There was no arguing. The demise of the studio system changed that. Overnight everyone became a free agent.

What this meant in practical terms was that, now, each individual had to find work on his or her own. Each director, actor or writer was looking for that door to walk through, that project that would make them say yes. What they did—and still do—is to keep all options open until the absolute last minute. They said no no no no. Each individual stood before a gallery of doors, waiting for the Magic One that compelled him to walk through it.

To me, this is a form of self-created hell. I’ve been there. Have you? It’s paralysis. In the name of keeping our options open, we exile ourselves to a psychological purgatory.

Have you seen His Way on HBO about the producer Jerry Weintraub? There’s a funny (and excruciatingly true) moment where George Clooney and Brad Pitt in separate interviews are talking about how Jerry Weintraub got each of them to commit to a project by swearing that the other had already signed on. An old trick in Tinseltown. It worked because it made each actor scared that he’d miss the boat if he didn’t say yes right away.

Artists and entrepreneurs today often live their lives like studio heads used to. Each one has a skein of projects “in development.” Each project is a door. Which one will we say yes to? We stall and postpone because we’re terrified of the moment when we have to actually say yes—and thereby say no to all the other doors, which might turn out to be the Golden Ones if we’d only held out a little longer.

We do that with mates and with jobs and with presidential candidates.

I have a theory that people who succeed in life—in relationships as well as art or business or service—are the ones who, for whatever reasons, are more able to say yes and walk through a door. Sometimes, I think, it’s better to be dumb than smart, if smart means you see so many sides to the alternative future that you’re paralyzed to act in the now. Almost every time in my own life that I’ve held off and hesitated, I’ve regretted it.

(I know this discussion of Yes and No is not in a direct line of logic from our previous two posts, An Ask Too Far and On Becoming More of a Prick). What’s the connection? That saying no, while it’s absolutely necessary in instances where our time or integrity are potentially being violated, is not always such a great idea in spheres where multiple competing opportunities stand open before us.

Sometimes yes is the answer. Which brings us back to our ancient nemesis, Resistance. Resistance loves to make us hesitate. Resistance gloats diabolically when we overthink or hang back. As my friend Jane said, walking through that one door made her entire life.

It’s always chilling to hear Hollywood horror stories about actors who’ve turned down parts that went on to make a rival into a superstar. Ronald Reagan, so legend has it, was offered the part of Rick in Casablanca that went to Humphrey Bogart. James Caan turned down the Jack Nicholson role in One Flew Over the Cuckoo’s Nest. So did Marlon Brando and Gene Hackman. Sigourney Weaver and Angelica Huston both spurned the part that went to Susan Sarandon in Thelma and Louise.

Sometimes the act of saying yes produces, in its mysterious way, the very conditions of success. “L’audace, l’audace, toujours l’audace!” said Georges Danton (or was it Frederick the Great? Or Napoleon?)

Sometimes the answer is, simply, yes.