I was at a Writers Guild meeting in Hollywood a few years ago; the members were debating whether or not to go out on strike. A microphone had been set up; one screenwriter after another stepped forward and spoke, pro or con. Each time the same Jekyll-and-Hyde transformation took place. The scribe started out low-key, logical, articulate. Within forty-five seconds the veins began popping out on his neck. His eyeballs bulged, his fists clenched. Finally, frothing at the mouth, he unleashed a rabid jeremiad. “F#@k the studios! Cut off the producers’ balls! Strike! Strike! Strike!” 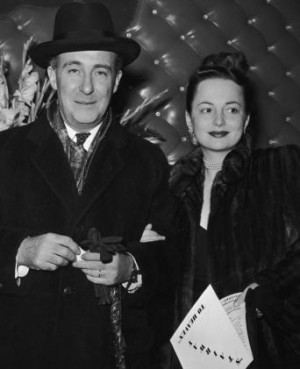 Marcus Goodrich with wife Olivia de Havilland. He didn't know it, but I was his worst nightmare.

Writers carry around a lot of rage. Why? Because they’re always getting screwed. Studios screw them, directors screw them, producers screw them. And why do writers (and most other artists) get screwed? Because they invite it. They want to be screwed. I know. I’ve walked around for years with a KICK ME sign pinned to my back.

Where does this insanity come from? Some trauma from childhood? Does “talent” equate to self-chastisement? Are writers and artists imprisoned in Wayne’s World, declaring “I’m not worthy?”

I once optioned a well-known novel. In other words, I found myself in the role of producer. The first thing I did was screw the writer. I couldn’t help myself. I was driven by evolutionary compulsion.

The tale is a grisly one, which some impulse of confession impels me to recount here. The author was a legendary novelist and one of the founders of what was then called the Scenario Writers Union—Marcus Goodrich. His book was Delilah, a classic naval drama about a WWI destroyer. (Delilah was the name of the vessel.)

At the time I optioned his novel, Marcus Goodrich was in his 90s and in a nursing home in Virginia.  I negotiated with his lawyer and guardian; I never actually spoke to Mr. Goodrich, for whom, by the way, I had (and still have) the utmost respect. Marcus Goodrich was a war hero, a pioneer of the screenwriter’s craft; among other distinctions, he had been married to Olivia de Havilland. He was the kind of guy I would have loved to have met and gotten to know. But none of that stopped me from screwing him.

Here’s what I did: Mr. Goodrich’s novel built to a climax that culminated in the outbreak of World War I. For my adapted script, I immediately switched it to WWII. I never told him. One of the central characters in the book was a Catholic monk. I instantly turned him into a Buddhist—and Japanese to boot.

The good news is that the movie never got made; I could never find a buyer. So I wasn’t forced to face or inflict that horrible moment at the premiere when Mr. Goodrich (who was an elegant Southerner) was assisted to his seat in the theater, flanked by proud children and grandchildren, only to discover as the film unspooled that I had ruthlessly mutilated his story and never uttered a peep.

Writers demand to be screwed. Even I, a fellow wordsmith, was compelled to hose down the first author who wandered lucklessly into my gunsights, despite the fact that I revered him.

There was a famous spec script that lit up Hollywood in the early 90s called Gale Force, written by David Chappe. I remember it sold for a million bucks, which was mega-dinero in those days (and has become mega-dinero again). I had to see what a million-dollar script looked like, so I asked my agent to get me a copy, which he did. I read it. It was damn good.

The story was of a small coastal town—off North Carolina, if memory serves—that gets evacuated as a monster hurricane bears down on it. Meanwhile, waiting offshore, are a boatload of thieves who intend to land at the height of the storm and sack the town. The twist? One solitary lawman has not abandoned Dodge. He takes on the bad guys single-handedly. The script was Die-Hard meets Hurricane. A slam-dunk no-brainer box-office-boffo blockbuster.

Cut to five years later. I’m back in my agent’s office (I dropped in twice a decade) and there on his desk I spy a screenplay, Gale Force. What’s this? “Oh, that’s the script I showed you five years ago; it’s been through a bunch of rewrites by other writers.” I borrowed the document and tore through it. Here’s the short version of what havoc had been wrought by these overpaid locusts:

1. The coastal town was gone. There was no town at all.

2. The hurricane was gone. No storm at all.

3. The central character had vanished. So had every supporting character.

4. The story was unrecognizable.

5. David Chappe’s name had disappeared from the title page.

What is it about screenwriters that compels even their dearest compatriots, the rewriters, to screw them blind? (And we’re not even talking about producers.)

P.S. David Chappe died in 2002. I hope it wasn’t from a broken heart, though I’d certainly understand if it were. Gale Force was terrific. To watch it die—and such a miserable death … arrrrggh, the thought makes me so mad I want to go out and find a screenwriter and beat him to a pulp.