Eduardo Cianelli, a villain for all seasons

Directors savor villains because villains light up the screen. Actors love to play bad guys. What could be more memorable onscreen than crushing a half-grapefruit into your wife’s face, as James Cagney did to Mae Clarke in Public Enemy, or, as Richard Widmark did in Kiss of Death, push an old lady in a wheelchair down a flight of stairs?

But what every bad guy needs most of all is a great Villain Speech. From our own era, it’s tough to top the “Greed is Good” monologue that Oliver Stone gives to Michael Douglas in Wall Street. My own favorite comes from a slightly earlier epoch—1939’s Gunga Din. 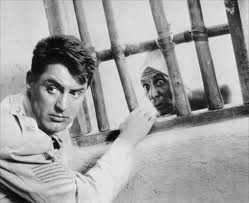 Have you seen this movie? It stars Cary Grant and Victor McLaglen, Joan Fontaine and Douglas Fairbanks, Jr., with Sam Jaffe as Gunga Din, directed by George Stevens from a screenplay by among others William Faulkner, Charles MacArthur and Ben Hecht—and the whole thing from Rudyard Kipling’s famous poem. I love this flick. I remember watching it seven nights in a row on Million Dollar Movie when I was a kid. The movie was shot in Lone Pine, California, but it looks totally convincing, with the Eastern Sierra standing in very credibly for the Himalayas. There’s a motel in Lone Pine today where you can stay in the Cary Grant Suite.

The villain in Gunga Din is played by Eduardo Cianelli, the distinguished Italian actor. He’s identified simply as “the Guru.” He plays the charismatic leader of a movement reviving the murderous cult of thuggee—stranglers. In other words, an early terrorist. The movie is totally in sympathy with the English, but the script loads up Cianelli with a fistful of juicy lines. (“Preserve your courage, gentlemen; you are not forgotten.” “Take him to the tower and teach him the error of false pride.”

Anyway the moment comes when the Guru gets his Villain Speech. Cianelli has outmaneuvered our three sergeants–Grant, Fairbanks and MacLaglen–and holds them in essence captive in the tower ring atop the golden temple of Kali. In the distance below, a regiment of Brits and Scots is advancing to the sound of bagpipes to rescue our three captives. But first Cianelli shows off the diabolically clever ambush he has set for the regiment. He’s got a whole army hidden. (In the film, Cianelli’s skull is shaven; his skin has been darkened so his eyes glitter; he wears only a dhoti—and a white cloth over his head.) The Brits will be slaughtered to the last man! At this, the faces of Grant, McLaglen and Fairbanks darken with horror—and the Guru’s Villain Speech shifts into high gear.

I see it in your faces. Who is this ugly little savage, to snarl so boldly at the British lion? Fine generals, friends, are not made of jeweled swords and mustache wax. They are made of what is there [points to his heart] and what is here [his head.]

Mad?! Mad? Hannibal was mad. Caesar was mad. And Napoleon surely was the maddest of the lot. Ever since time began, they have called mad all the great soldiers in this world. Mad? We shall see what wisdom lies within my madness. For this is but the spring freshet that precedes the flood. From here we roll on, from village to town, from town to mighty city, every-mounting, ever-widening, until at last my wave engulfs all India!

The thing about a great villain speech is it shouldn’t be “villainous.” Passionate, yes, and keen—but it must also make perfect sense. What Eduardo Cianelli says here in an action adventure film from 1939 cannot be far from what Gandhi was thinking in real-life (though a tad more non-violently) at that very moment as he (in fact attired in a dhoti, just like the Guru) was out-generaling the British politically and laying the foundation that would compel the empire’s withdrawal just a few years later.

Gunga Din even gives the Guru a noble death. Cianelli sacrifices himself by leaping into a pit of poisonous vipers. Grant and McLaglen try to stop him …

But our villain stays the sergeants with a raised hand.

You have sworn as soldiers, if need be, to die for your faith, which is your country, for England. Well, India is my country and my faith, and I can die for my faith and my country as readily as you for yours! Go, children. India, farewell.

A great Villain Speech should ring true. It should masterfully articulate a valid point of view. When we hear Gordon Gekko make his case for greed, we can’t help but say to ourselves, “Hey! The dude has a point.”

It’s great fun to write a Villain Speech. It must be even greater fun to play one. Remember, even the ebola virus has a point of view. In Shane (another George Stevens film), the great character actor Emile Meyer plays”Ryker,” the Bad Guy Cattle Rancher who’s been tormenting the sweet, innocent farmers for the entire movie. Here’s his Villain Speech, delivered to Van Heflin as Joe Starrett with Starrett’s 8-year-old son, played by Brandon deWilde, looking on (I’m paraphrasing from memory):

When I first came to this country, Starrett, you weren’t no bigger than your boy is now. We fought Injuns and rustlers. Good men died. Now you sodbusters come in, fencing my cattle off from water, fencing me off from my own land. I made this country!

The villain does have a point. (“I’m your father, Luke.”) He’s the antagonist. He carries the counter-theme. The more convincing his case, the better the story.

This is a deep subject. There’s a lot of great stuff to be learned from villains. More to come.