Paul’s All Is Lost Moment

My friend Paul is writing a pilot. He’s never done a piece of writing this serious before. The work is totally on spec. 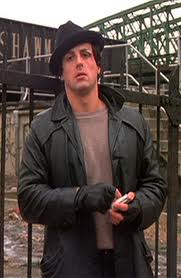 Paul's All Is Lost Moment was a lot like Rocky's

Paul has a full-time business and has to do his writing at odd hours. A couple of weeks ago he had a crisis that made him almost suicidal. When I describe it to you, you’ll say, “Man, have I been there!”

A script for a TV pilot is about fifty-five pages long. Paul was on Page 52. He went home after work, sat down at his laptop and opened up the script to (blank) page 53. But first he decided, just for fun, to skim over pages 1 to 52.

By the time he was done, he was in despair. I saw him the next morning.

“What a blistering, unconscionable piece of crap! Who am I kidding giving birth to this abortion, or even deluding myself that I am, or might someday become, a writer? This worthless, steaming turd that I’ve been busting my ass over for … “

Paul was distraught. Inconsolable. I had to walk him home just to make sure he didn’t do something desperate.

“And did the pages miraculously get better when you looked at them again?”

We started talking about the scene in the first Rocky, where Sylvester Stallone, on the night before the big fight, gets up out of bed and goes down, alone, to the arena. He sees the giant billboards with pictures of the champ, Apollo Creed—and one huge placard with his own image. His face falls. His shoulders slump. The promoter is the only person in the auditorium. “What are you doing here, Rocky? Go home and get some sleep.”

Rocky shuffles back to his hellhole apartment and crawls miserably into bed with his girlfriend Adrian. “Who am I kidding,” he says, “getting into the ring with Creed? He’ll wipe the floor with me. I’m gonna look like a fool and a bum, which is what I am.” 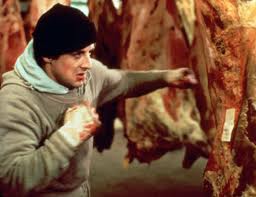 But there’s another aspect to the All Is Lost moment, in fiction and in real life, that is often overlooked or underappreciated.

The All Is Lost moment comes at the instant when we stand on the threshold of moving to the next level. We sense this—and we panic. Resistance rears its malignant head and hammers us.

Rocky was face to face with the possibility that he might actually possess the talent that he had always dreamed he had. Paul’s moment was exactly the same. Fear of that breakthrough was what unnerved them both.

Consider Rocky. Apollo Creed did not wipe the floor with him. Rocky fought the heavyweight champion of the world to a draw, something no other contender had ever done. True, Creed beat the hell out of Rocky—but Rocky gave the champ as good as he got.

Rocky was wrong in his self-assessment as a bum.

Seventy-two hours later they had both passed over an ocean and arrived at a new world.

“I know I’m not done with this damn thing,” Paul said three days after his All Is Lost moment. “I’ve got rewrite after rewrite ahead of me, and in the end the script may turn out to be as big a piece of garbage I originally thought it was. But I don’t care. This is the first piece of serious work that I’ve really finished. I started with nothing twelve weeks ago and I’ve got something today. And I did it.”

We’ve all been to that place where Paul and Rocky stood, and we’ll all be back there again. Will we remember, next time? When we hear that self-annihilating voice in our heads, will we recognize it as Resistance? Will we understand that the panic we feel is caused not by any rational assessment of who we are or what our work is worth, but by the dread of moving to the next level?

Will we take heart and steel ourselves with patience?

The All Is Lost moment is inevitably followed by a breakthrough. Trust me. You can set your watch by it.