If you’re an artist or an entrepreneur, your working life is by definition about risk. You’re already rolling the dice or you wouldn’t be doing what you’re doing. But beyond the inherent hazards of the artist/entrepreneur’s life, how should you manage risk? 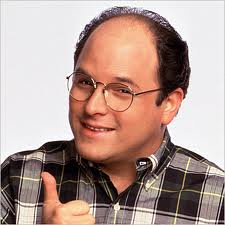 No, we're not "swinging to the sweet sounds of Risk Management"

(I’m not referring, by the way, to the Seinfeld episode featuring George Costanza and his protégée.)

My theory is to bet on yourself.

My stuff has crashed and burned 90% of the time. But always when I find myself with money, I use it to buy time—time for me to work.

I bet on myself.

Why does the chef who has opened three restaurants, all of which have gone belly-up … why does he leave his safe, lucrative, prestigious job running someone else’s four-star kitchen to take another flyer on another new eatery? Is he crazy? Yes. But he knows his own heart. Is he driven by a dream of fame, money, recognition? No doubt. But in his deepest soul he is impelled by his own vision. At night after work, snuggled up with his sweetie, our chef sees new menus scrolling before his eyes; he sketches designs for stunning entryways and scribbles rosters of all-star staffs; he envisions the entirely new cuisine he will invent and elevate to perfection. He can’t help himself. Should he splurge his bankroll to take his squeeze to St. Bart’s? Okay. But the lion’s share must go to a seed account for the Next Big Try. It has to. His only alternative is to hang himself.

When I worked in advertising in New York, I would sock away my paychecks, then quit and move someplace cheap where I would write a novel. When I couldn’t sell that novel, I crawled back to NY, got out the knee pads, then did the same drill over again. When I made money in Hollywood, I used it to buy more time and did the same thing.

One frozen February Friday in New York, I caught a ride up to the country with my ad boss (who was a superstar creative director and a good guy, who had taken me off the street when my “portfolio” was literally scribbled on the backs of cocktail napkins). As his BMW was cruising north on the Saw Mill River Parkway we happened to pass what was probably the dirtiest, scurviest freakazoid hippie no-hoper, shivering in the frozen slush along the roadside. “Yeah, Steve,” my boss said, indicating the gentleman in question, “that’ll  be you in a couple of months.” I gulped. Of course I was thinking the exact same thing. My boss knew my history. He had once described me as “the man who has written more words for less money than anyone in literary history.” But he knew, and I knew, that I was going to roll the dice again—and probably in the aforementioned two months.

In Hollywood, writers and directors have an axiom: “One for love and one for money.” What they mean is that the crafting of a career in the real world sometimes requires a canny to-and-fro-ing between art and commerce. Take one job on Track #2, the commercial track, but make sure the next one is on Track #1, the track from your heart.