How We Get Better

My friend Paul had a writing breakthrough last week. I mean a serious one, where his game elevated two or three levels in one shot. 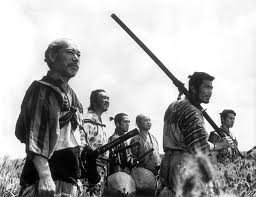 Kurosawa's "Seven Samurai." What does it take to get to the next level?

It’s tremendously encouraging to witness something like that because for most of us, most of the time, the experience of artistic enterprise is like toiling in the muck, slinging shovel after shovel of ooze and wondering if we’re advancing by so much as a centimeter, or—our direst fear—falling back.

That’s where Paul has been for as long as I’ve known him. Now, all of a sudden, POW!  His breakthrough was like a touring golf pro who out of nowhere fires a 62 in competition. Or a downhill racer who posts a time that’s four seconds faster than her personal best.

For the rest of us struggling in the trenches, I offer a few tentative observations, based on watching what happened with Paul over the past week.

1. Paul’s breakthrough was preceded by an All Is Lost moment.

2. When the breakthrough happened, he didn’t recognize it.

3. The essence of the breakthrough was not technical–i.e., an increase in skill. It was a finding of his own voice.

4. This new voice was not the “real” Paul; it was the artistic Paul.

5. Paul’s breakthrough came not by improving within a lesser medium, but by leap-frogging to a higher medium entirely.

Let’s examine these one at a time.

First, the All Is Lost moment. Suffice it to say that Paul, for reasons of his own, had reached a state of near-suicidal despair about his work. Paul has a full-time business apart from writing. He had failed so many times, over so many years, in pursuing that artistic dream that he couldn’t take it any more. He was throwing in the towel.

Second, Paul didn’t recognize the breakthrough when it happened.

Desperation can be a good thing sometimes because it gives us permission to cast caution to the winds. In despair, Paul sat down at the keyboard and tried one last Hail Mary. The form this took was a six-page story. Paul worked on it hard. He cut and tweaked and revised and reworked.

But when it was done and he looked at it, he didn’t know what it was. It scared him. He read it and thought, Man, this is dark. This is creepy. This is beyond the pale.

Paul was afraid to let anyone see the story. He feared they would say, “You are one sick mo-fo.” (Which in fact is exactly what I told him.)

Third, the essence of the breakthrough was not so much increased tech skill, but rather a more powerful expression of his own voice.

What stops us from writing in our own voice is our fear that such work will be too _________. Too crazy. Too twisted. Too slick. Too dumb.

Paul’s state of despair had carried him past that. He didn’t give a damn what anybody thought because they all hated his stuff anyway. So he wrote for himself alone.

Fourth, the voice that surfaced was not Paul’s “real” voice but his artistic voice.

Paul saw his voice on the page and it frightened him. It frightened him because it was coming from some part of himself that he recognized but that he had never, except in fleeting moments, been able to access.

It was like looking in a mirror and seeing someone that’s simultaneously you and another-you. Where did this doppelgänger come from? Can it be me? If I embrace this creature, what will become of the “regular” me?

Last (and most important), Paul’s breakthrough came not by excelling in a lesser arena but by ascending to a higher arena entirely.

The work Paul has been struggling with for years has been TV. Pilots. Screenplays sometimes. (Not, as Jerry Seinfeld once said, that there’s anything wrong with that.) But Paul wrote this story, his new one, at the novel level.

He aimed higher. He wrote over his head.

What this tells me is that his game was always at that higher level. The problem was he had been shooting low and playing small. When he shook off the shackles, he discovered he could fly.

So where does this leave Paul?

He’s not a pro yet. You and I can’t invest a quarter mill that he’ll deliver the goods. He has dark forests still to tramp and dragons yet to slay.

But I take my hat off to the man. He has run a mile in under four minutes. He has driven a major-league curve ball into the upper deck.

Can he do it twice? Can he sustain that level over a full-length piece? Can he bring it in on-time and under-budget? Can he do that twice?

When we turn pro, our DNA changes. I can’t prove it in a lab, but I can look in Paul’s eyes and see that his molecular structure has altered.

You are on your way.