In screenplay lingo, writers and directors refer to the “A” story and the “B” story. (There can be a “C,” “D,” and “E” story, but let’s leave those alone for the moment.) 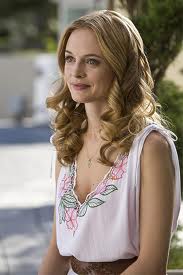 Heather Graham in “The Hangover.” Sometimes the “B” Story rides to the rescue of the “A” story.

The “A” story is the dramatic core of the movie. It’s the foreground—the primary throughline that the protagonist follows. The “B” story is a supporting saga, running on a parallel (and often seemingly-unrelated) track.

In The Hangover, the “A” story is the guys’ efforts to find their friend Doug. The “B” story is Stu’s (Ed Helms) struggle to break out of thrall to his shrew girlfriend back in L.A.

And don’t forget to pack your Rogaine!

Packing of the Rogaine … check!

In screenwriting theory, the “B” story should always support the “A” story. The two must resonate, even if they don’t seem to at first.

In the crisis, “B” rides to the rescue of “A.” The two storylines come together and reveal themselves to have been metaphorically linked all along. Elements of the “B” story help the hero survive and prevail during the crisis/All Is Lost moment of the “A” story.

The reason I’m harping on these story-structure arcana is because they’re so true and so important in real life—particularly in our own Turning Pro moments. You and I have an “A” story and a “B” story too.

In The Descendants [see last week’s post], the “A” story is George Clooney’s struggle to survive the discovery of his wife’s infidelity, coupled with his grief/anguish/guilt/rage at her going into a coma after a boating accident—and thus threatening to destroy both him and the whole family. Clooney’s character also happens to be a lawyer and chief trustee of a pristine piece of Hawaiian real estate that is in the process of being bequeathed to him and his relatives. The extended family is clamoring to unload this unspoiled parcel of paradise to the highest bidder.

The Descendants‘ “B” story is how Clooney handles the ethical issues that arise from this situation.

In Turning Pro, I wrote about “shadow careers” and addictions. The point was that these are surrogates and metaphors for our true calling. For example, a woman whose dream is to be a writer might take a job as an editor at a magazine (her shadow career). Or a guy with a gift for music might become a boozing, hotel-room wrecking wild man (his addiction) without actually working to become a real rocker first.

We can think of these shadow careers and addictions as “B” stories.

The “A” story issue in both cases is “Will our hero find his/her true calling and, if so, will he/she have the strength of character to embrace it and live it out?”

Still with me? Let’s go back to the Hollywood model. In the crisis, remember, the “B” story rides to the rescue of the “A” story.

In The Hangover, the crisis/All Is Lost moment comes when the guys recover “Doug” (who has been kidnapped by Mister Chow and is returned to his buddies with a bag over his head), only to discover, when the bag comes off, that it’s the wrong Doug. It’s the guy who sold Alan (Zach Galifianakis) the “roofies,” the date-rape drug that started this whole crazy, amnesiac night. Our boys are screwed. They’re out of clues. They’ve shot their wad and they’re no closer to finding their pal Doug.

But here comes the “B” story. Stu, the henpecked dentist, has (though he doesn’t realize it yet) come into his own during this crazy night. He has met and won the heart of—and married—the dazzling stripper Jade (Heather Graham) who treats him much better than his ball-busting g.f. back home. Now, in the crisis, it’s Stu who solves the puzzle. He’s the one who has the insight to connect “roofies” to “roof” and figure out where Doug actually is. What’s behind this brilliance? Lame Stu has turned into super Stu.

Finally home in L.A., at Doug’s wedding, Stu officially dumps his girlfriend and (we hope) will soon find true love, if not with Jade back in Vegas, then with someone who appreciates him a little more than his original fiancee did.

But back to The Descendants. In the “B” story, remember, Clooney the lawyer is serving as executor for his cousins, aunts, uncles and in-laws, all of whom are frothing at the mouth to despoil the pristine piece of Hawaiian real estate that they are heirs to. They want to take the money and run and they are pressuring Clooney big-time.

But somehow our George finds the strength of character to do the right thing. He won’t sell the land. He’ll preserve it, even at the cost of having his extended family shun him in perpetuity.

In the “A” story, Clooney fails on all fronts. He’s cuckolded, humiliated, loses his wife whom he loves, and is disgraced in front of his young daughters, whom he also dearly cherishes. But in the “B” story, George acts like a man in the best sense of the word. He stands up, alone and in the face of tremendous adversity, for what he believes in.

This wins him not only his daughters’ respect, but his own. The “B” story flows into the “A” story in the crisis/All Is Lost moment and saves the day.

For us as artists and entrepreneurs trying to pursue our callings in a courageous, honorable and professional way, the “A” story is “Will we do it—and how?” The “B” story is how we deal with our Resistance and our self-sabotage, our addictions and displacement activities and shadow careers.

Our “B” story is a metaphor for our “A” story. It parallels it and is inextricably linked to it. Before we can break through in our “A” story, we need to handle, or at least understand, our “B” story. “B” can point us to our true calling—“A”—and, when we face “B” with unsparing honesty and guts, it can get our “A” story rolling powerfully down the track.