I heard this from Gen. James Mattis a couple of years ago when he was speaking at Marine Corps University in Quantico, Virginia. It has proved invaluable to me as a writer. 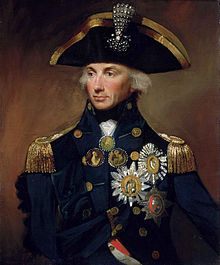 Mattis cited Admiral Horatio Nelson, England’s greatest naval hero. On the eve of the battle of Trafalgar on October 21, 1805, Nelson summoned his captains to his flagship, H.M.S. Victory.

Nelson knew that in the morning, each of his skippers would be essentially on his own. Formations would break apart, smoke and fire would obscure the scene. Individual captains would have no way of communicating with him, or he with them.

How would each commander know what to do?

When their own vessel was on fire, when wounded sailors were crying out all around them, when smoke blanketed the surface of the sea so that the skipper could no longer tell where he was, where the enemy was, or even if the battle were being won or lost … how would that solitary, isolated captain know what to do?

“In that moment,” said Nelson, “remember this: I shall fault no commander who lays his vessel alongside a ship of the enemy.”

In the American navy, that statement is called “commander’s intent.”

You and I as writers, artists and entrepreneur’s can follow that statement too.

Like Nelson’s captains, we advance into action shipshape and flushed with confidence, in formation alongside our squadron-mates, with our sails spotless and our brightwork gleaming. Our decks have been holystoned; every cannon is clean and ready and manned by crews unbloodied and keen for the fight.

Then the shit hits the fan.

By the time we’re a third of the way through our book or our movie or our new Nicaraguan restaurant, we can’t remember why we started, where we were going, or how we imagined we could ever get there in the first place.

By the time we’re two-thirds through, it’s even worse. And at nine-tenths, we’re deaf and blind and reduced to jibbering incoherency.

Nelson’s statement of commander’s intent was perfect for his battle.

You and I need to seriously consider ours. What is our overriding intention? Why are we writing this book, or making this movie, or organizing this start-up?

In my experience, Nelson’s statement works pretty well in almost every case.

Keep fighting as if we were going to win.

Keep moving forward even if we don’t know where we’re going.

The smoke will clear eventually. We’ll lose or we’ll win. Great events are out of our hands. All we can do is that which is in the power of one ship, one crew, one captain.

Is Act Two breaking our back? Deal with that.

Have we run out of money? Is the kitchen staff mutinying? Is Resistance beating us to a pulp?

Steer for the nearest enemy man o’ war and put the mouths of our cannons as close to his waterline as we can get.

This is scary. Nobody says it doesn’t elicit severe tightening of the puckerstring. And it’s risky. Seamen become casualties when we fight broadside-to-broadside.

But in crunch time, the skipper who remembers what he’s trying to do is the one who survives.