We were talking last week about thinking in terms of multiple drafts. The corollary is to concentrate on only one objective per draft — e.g., stakes, rhythm, theme, length, and so forth. 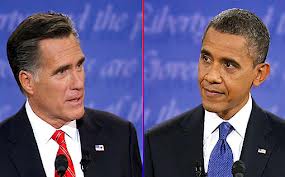 Debate #1. When the Prez slipped into a minor key, it almost finished him.

Another one I like is Major Key and Minor Key.

I’ll go over a manuscript or screenplay, for example, looking only for these. I’ll ask myself, How much of this piece is in a major key? Are there moments in a minor key, and, if so, where are they and why are they there?

Action movies are major key. Films for kids. Comedies use a lot of major key. Shakespeare said all comedies should end with a wedding. Most weddings (in real life as well as in fiction and film) are major key.

(I’m not knocking this, by the way. Indie films are meant to be interior, moody, reflective. I love ’em.)

A minor-key scene is thoughtful, unhurried, internal. Minor-key scenes are shot in shadow or muted color. Often they are “private moments,” with only one principal on screen. Sometimes they are silent.

The Godfather has many minor-key scenes, even sequences. So does Casablanca. Lost in Translation is almost all minor-key. Transformers II not so much.

Some films play keys “against type.” The violent scenes in Taxi Driver were shot in a minor key instead of a major. This made them twice as creepy and twice as scary. Remember when Travis Bickle massacres everybody at the end? Or even the “You talking to me?” scene. That was in a minor key. Much of the violence in The Godfather pictures is played as minor-key. The Sopranos too. Bloody scenes in vampire movies are often shot against type, in a minor key.

Minor-key scenes are more intellectual. One associates them with seriousness, depth. The danger with minor-key moments is they can become pretentious. (Pretentiousness sometimes wins awards.)

A great book or movie or album should, like life, have a balance of major-key and minor-key moments. It should follow the symphonic model: take the same musical theme and explore it in both major and minor keys.

A restaurant can have major and minor keys. We may enter to a bright, welcoming reception area (major key), but ask the maitre d’ to seat us at a moody, romantic booth (minor key) in the back.

Did you ever see the series, Victory at Sea? I can’t think of any long-form piece that alternated major and minor keys more effectively. Victory at Sea is a 24-part documentary about the U.S. Navy in WWII. The producer, Henry Salomon, took the viewer’s emotions through heart-bursting battle sequences (major), then slowed to depict the mournful, tragic aftermaths (minor)—all with wonderfully evocative music by Richard Rodgers, scored by Robert Russell Bennett conducting the NBC Symphony Orchestra. If you haven’t seen Victory at Sea, it is definitely worth netflixing.

The United States is a major-key country. When Barack Obama lapsed into a minor-key during the first Presidential debate, it almost cooked his goose. We Yanks don’t like minor keys in our politics. When Jimmy Carter uttered the word “malaise,” he was toast.

One of the reasons Americans are skeptical of Europe is that Europe is in a minor key. The Euros think too much. The continent has endured too many wars and too much tragedy. The experience has made them moody and reflective. I hear they even read books.

My favorite nation for major and minor keys is Russia. That’s why Russian literature is so towering, not to mention ballet, classical music, and even the Leningrad Cowboys (though technically they’re Finnish.)

If you have a project that’s past the first-pass stage, take one run-through to examine it for major and minor keys. A mistake I often make is to be too light on the minor-key moments. I’m afraid of being boring, of slowing down the momentum.  This is a mistake. Too much major key makes the piece feel like Burger King.

We all need a moody, dimly-lit spot in which to sit, order an absinthe, and think things over.