I’m a huge fan of Villain Speeches. There’s nothing better in a movie or a book than the moment when the stage is cleared and Satan gets to say his piece. 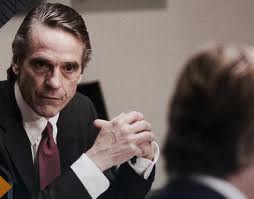 Jeremy Irons in "Margin Call." My favorite villain of 2012.

The villain in Gunga Din, played by the great Italian actor Eduardo Ciannelli, is called simply “the Guru.” He’s like Gandhi, if Gandhi had traded non-violence for mega-violence. This speech is kicked off by Cary Grant, as British sergeant Archibald Cutter, confronting the Guru in outrage over his extremely clever plan to lure Cutter’s regiment into a trap and massacre it to the last man.

Mad? Mad. Hannibal was mad, Caesar was mad, and Napoleon surely was the maddest of the lot. Ever since time began they have called mad all the great soldiers of this world. Great generals are not made of jeweled swords and mustache wax. They are made of what is here [points to his heart] and here [his head.] Mad? We shall see what wisdom lies within my madness.

Second, eloquence. A great villain speech possesses wit and style. Mick Jagger and Keith Richards knew this when they wrote, “Please allow me to introduce myself, I’m a man of wealth and taste.”

Here’s the speech that won Michael Douglas an Oscar:

My favorite villain speech from a recent film is this one from Margin Call. Jeremy Irons plays John Tuld, the CEO of a giant Wall Street firm that has spent the previous eight hours ensuring its own survival by deliberately unloading massive quantities of worthless mortgage-backed securities on every customer it can find, thus producing a worldwide stock market crash. Now, at day’s end, Jeremy Irons sits at a linen tablecloth in the executive dining room, savoring a tasty filet. Eighty floors below, the devastated metropolis recedes into twilight.

Kevin Spacey plays sales chief Sam Rogers, the only character in the movie who possesses a glimmer of conscience. He enters and tells Jeremy he’s had enough, he wants out. Jeremy won’t let him go. “When did you start feeling so sorry for yourself, Sam? It’s unbearable.”

So you think we might have put a few people out of business today? That it’s all for naught? You’ve been doing that everyday for almost forty years, Sam. And if this is all for naught, then so is everything out there. It’s just money; it’s made up. Pieces of paper with pictures on them, so we don’t have to kill each other just to get something to eat. It’s not wrong. And it’s certainly no different today than it’s ever been. 1637, 1797, 1819, ’37, ’57, ’84, 1901, ’07, ’29, 1937, 1974, 1987—Jesus, didn’t that one fuck me up good—’92, ’97, 2000, and whatever we want to call this. It’s all just the same thing over and over; we can’t help ourselves. And you and I can’t control it, or stop it, or even slow it. Or even ever-so-slightly alter it. We just react. And we make a lot money if we get it right. And we get left by the side of the road if we get it wrong. And there have always been and there always will be the same percentage of winners and losers, happy foxes and sad sacks, fat cats and starving dogs in this world. Yeah, there may be more of us today than there’s ever been. But the percentages, they stay exactly the same.

[Hats off to the writers of these gems: J.C. Chandor for Margin Call, Joel Sayre and Fred Guiol for Gunga Din, Stanley Weiser and Oliver Stone for Wall Street.]

On any project, I ask myself, “Who’s the villain?” “What does he want?” “Have I given him at least one juicy scene where he really gets to say his piece?”

I wrote in Do The Work that an excellent way for a writer to proceed is to start at the finish and work backward. That’s really just another way of saying start with the villain and work backward from there.