Continuing our discussion about the difference between publishable and unpublishable: 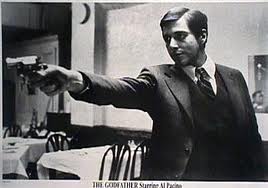 I said last week that real = unpublishable, and artifical = publishable. Let me qualify that a bit.

“Artificial,” in the sense I intend it, does not mean fake, phony, made up. It means crafted with deliberate artistic intent.

“Artificial” means employing artifice to achieve the expression of a Deeper Truth.

The artist is seeking the real by means of the artificial.

Have you ever seen any of Monet’s Water Lilies in person? If you stand back at a viewing distance of, say, twenty feet, the illusion is astonishing. The artist has captured light reflecting off water so brilliantly that it makes you catch your breath.

Now walk up to the painting. Get close. Look again.

All you see now are blobs of paint on canvas. There’s no shining water at all.

What is the Deeper Truth in this scene? How did Francis Ford Coppola and Mario Puzo, the director and screenwriters, employ artifice to take us there?

First, consider that this same event could have been filmed in hundreds of alternate ways. The scene could have been played, for example, from the point of view of Capt. McCluskey. The filmmakers could have presented it as the tragic climax of an honorable life lived by a brave cop, cut down at the peak of his powers by a cunning, murderous gangster.

That way of seeing the event may, in fact, contain elements of truth. But it would not be the Deeper Truth, at least not the deeper truth of this particular story.

The following are some of the elements Coppola and Puzo manipulated with artifice to deliver to the audience their version of the deeper truth:

In other words, deliberate artistic intention.

In this scene, what exactly is the Deeper Truth that the filmmakers wished to convey?

Are they depicting a significant milestone in Michael’s character arc—from “civilian” in the movie’s opening wedding scene to “Godfather” in the film’s final moment?

Remember, too, that this scene at Louis’ restaurant has been set up by previous scenes (prior context) in which Michael has volunteered to commit these murders. No one has coerced him. The role of killer is his idea.

They’re gonna search me when I first meet them, right? So I can’t have a weapon then. But if Clemenza can figure a way to have a weapon planted for me, then I’ll kill them both.

Are the filmmakers showing Michael’s descent into evil? Are these murders the precursors to his masterminding of the cold-blooded assassinations, in the movie’s climax, of the heads of all Five Families?

Or are the moviemakers demonstrating for us that Michael’s seeming corruption is taking place within the context of a greater corruption, as evinced by Sollozzo’s attempt to murder Michael’s father and McCluskey’s complicity as a cop on the take—so that Michael is in fact the only honorable member of this triangle, a hero we in the audience are correct to be rooting for?

Are they saying that Michael’s motivation—love of his father, loyalty to his family, the upholding of a code of honor, even if it is one framed outside the law—is nobler than the totally amoral criminal conventions of the men he’s about to kill?

Are the filmmakers invoking Fate in this scene? Are they saying it is Michael’s destiny, like a character in a royal family in Sophocles or Shakespeare, to be inevitably sucked into the drama of “the sins of the fathers?”

Or are they positioning Michael as a more modern tragic hero, whose fate is the product of his own misguided decisions?

Remember, too, what will happen in the story immediately after this scene (post context). Michael will exit the restaurant and be whisked away by a waiting car. He will be spirited out of the country to Sicily, where he will meet and marry Apollonia (Simonetta Stefanelli)—and be marinated for months in the undiluted old-country ethos of the Sicilian mafia. So that when he eventually returns to the States his transformation from civilian to Godfather will be many steps further along.

Do you see what I mean about this scene delivering a Deeper Truth?

To that end, the moviemakers shot it dark and moody, lit in such a way that the characters’ faces appeared hellish and damned, while every scrape of a chair-leg against the white-tile floor echoed ominously in a spare, chalk-on-the-blackboard sound environment. They filmed the scene entirely from Michael’s point of view, with an excruciating, slowly-escalating editing rhythm of tension and suspense, which culminated in a shadowy closeup on Michael’s face (with his jaw swollen from a blow delivered a few days earlier by Capt. McCluskey) as the sound of the screeching brakes of an approaching subway train rises in the background … until Michael stands, fires the fatal shots, drops the weapon, and, as the musical score drives the operatic drama to its climax, is caught up by the getaway car and driven away.

My own feeling is that the filmmakers intended to make all of the statements above.

That is the Deeper Real they were using Artifice to achieve.