Shawn, Jeff and I just did an hour-long “Ask Me Anything” podcast called Organizing a Day, Organizing a Year. We’ll be e-mailing it on New Year’s Day to everyone who has signed up for First Look Access. Our aim is to help get 2014 off to a productive start. 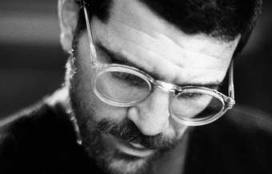 David Mamet. The playwright is well acquainted with agony.

One of the subjects that came up during the taping was Predictable Trouble Spots.

We were talking about looking ahead to the new year, starting out strong, staying strong—and then we remembered the horrors that inevitably lie ahead.

Bank on it, there will be moments for you and me during 2014 when our plans will run awry, when we lose focus, run out of gas, freak out, abandon hope, drop to our knees and beg for mercy.

Is there an answer?

The trick is acknowledging, before we start, that these shitstorms will be coming—and mentally preparing for them in advance.

The marathon runner knows that at 22 or 23 miles she is going to “hit the wall.” At this distance the body’s stores of glycogen run out. Energy crashes. Our legs go dead. Agony ensues.

The trick is to anticipate this crisis and brace ourselves for it physically (carb loading) and emotionally (mental toughness). Then when the crash occurs, we don’t devolve immediately into panic mode.

Same thing with a book or a movie or any long-term project.

We’ve started. We have set sail. Enthusiasm and early momentum carry us forward, like mariners pushing off from Palos, Spain and skimming joyously toward the Indies. Then suddenly we glance astern and we can’t see land any more.

As Columbus declared at that moment, “OMG!”

The honeymoon is over. Love’s first flush has flown. We realize we’re committed and there is no backing out.

Here is David Mamet in Three Uses of the Knife on the subject of “Second Act Problems”:

The joke has it: remembering you set out to drain the swamp is hard when you’re up to your ass in alligators. And that is the problem of the second act.

How many times have we heard (and said): Yes, I know that I was cautioned, that the way would become difficult and I would want to quit, that such was inevitable and that at exactly this point the battle would be lost or won. Yes, I know all that, but those who cautioned me could not have foreseen the magnitude of the specific difficulties I am encountering at this point—difficulties which must, sadly, but I have no choice, force me to resign the struggle (and have a drink, a cigarette, an affair, a rest), in short, to declare failure.

This was my own bete-noir for years. I could not finish a project. It’d get 99.9% of the way through and I’d panic.

Fear of success? Fear of failure? I have no idea. I would do just what Mamet predicted. Jam a stick of dynamite under everything I love and light the fuse.

5. When we’re about to get better.

Skills don’t advance in a steady ascent; they move forward by plateaus. It’s a staircase, not a rising slope.

When we come to a new step, we hit the riser first. We hit the wall.

In my experience, two things can happen at this point.

First, we can panic. I mean this literally. We wake in terror. We sweat. We feel fear in every sinew.

Or second, we become enraged. Free-form fury suffuses our body. Monologues of rage play out inside our skulls. We blame everybody. Those bastards! They’re betraying me!

What’s really happening is we’re about to move to the next level and it is scaring the crap out of us.

But back to our original subject: Organizing a Year.

When we make our plans for 2014—the novel we’re going to finish, the new business we aim to start, the family or service project we intend to complete—we will be very wise to remember, like those sailors setting off for the Indies, that we will encounter storms; we will become becalmed; sickness will break out onboard; we may confront a mutiny; inexplicable panic may strike the crew or even ourselves, the captain.

The storm will pass. Becalmed periods will end. We might have to break out the cutlasses and the flintlock pistols, but we will quell the mutiny. Even the terrors of night will yield to the new day.

The Indies lie ahead, shipmates! Have faith and keep sailing toward the setting sun.