Operating Close to the Edge

Here’s something I learned from my friend Paul. He has a metric he applies to characters in a book or a movie. He asks, “How close are they to the edge?” 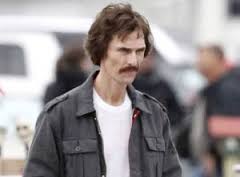 Matthew McConaughey in "Dallas Buyers Club." The actor has had great success playing characters who are close to the edge.

What he means is, “How desperate is this character? How capable is he of going to extremes?”

Paul’s theory is that, if we want to write a character who is riveting, we have to give that character a moment to perform some extravagant action—the sooner in the story the better. The character has to announce to the audience, “I am hanging on by my fingernails. Don’t take your eyes off me because I am capable of doing anything.”

According to Paul, the closer a character is to the edge, the more interesting he will be and the more potential drama he will bring to the story.

Take Tony Soprano. Part of what made that character so watchable—and this is true of just about every character on The Sopranos or Breaking Bad or Mad Men (to cite only cable dramas)—is that they were ready at any moment, it seemed, to take off-the-wall action. The clerk in a donut shop keeps Christopher waiting; the next thing you know, Christopher has his gun out and is shooting the dude in the foot. Carmela flirts with her priest and falls in love with Furio, her husband’s bodyguard. Even the most minor, minor character—Vito Spatafore’s troubled prepubescent son—is capable of an action that makes us cover our eyes and cringe.

They’re operating close to the edge.

Why is that good for drama? Because a protagonist, whether it’s Richard III or Emma Bovary or Mathew McConaughey as Mud (or as Dallas in Magic Mike or Ron Woodroof in Dallas Buyers Club), if he’s going to make the story work, has to be willing to push the drama to the limit. The hero must be capable of wringing the last ounce of revelation from the story. If he stops short, we walk out grumbling and cursing.

Sometimes the Coen Brothers (I’m a big fan) will write characters who are not close to the edge. Llewyn Davis is one. It almost never works. The brothers are doing it deliberately, though I confess I haven’t been able to figure out why, or what they’re trying to accomplish, though I commend them for the effort.

In real life of course, most of us try to stay as far from the edge as possible. We don’t seek danger. We don’t tempt fate. We want a nice, quiet life so we can raise our family, keep our job, do our work.

That’s great for real life, but it’s hell for a dramatic protagonist.

Why did Anthony Weiner’s story stay so long on the front page? Because we could sense that he was close to the edge. He had to be, or why would he do what he did?

We’re drawn to characters who look like they’re about to implode or explode. Why? Because we’ll learn something when they do. We’re waiting for the train wreck. So we can see human nature raw and exposed.

In real life, most ready-to-blow characters back off short of the ultimate explosion. They apologize to the press like Chris Christie. Or they recede from public view like Edward Snowden.

That doesn’t work for drama. The character has to stay out front, and he or she has to keep edging (or barreling) closer and closer to the edge. You, the writer, have to push them there. And with each step, their actions have to show us more about the nature of the human heart.

The writing of drama is a crazy business. The practitioner needs to keep her own life simple and safe so she can do her work. But her characters have to go all the way to the edge—and over.

In Shawn’s upcoming book, The Story Grid, he explores the dozens of reality-check questions that the writer has to ask himself about his work (or his editor has to ask). What’s my inciting incident? What does my protagonist want? What are the conventions of the genre I’m writing in and have I adhered to them or, if I’ve violated them, what is my purpose?

Paul’s is one of those questions: “How close to the edge are my characters?”

And how can I push them even closer?