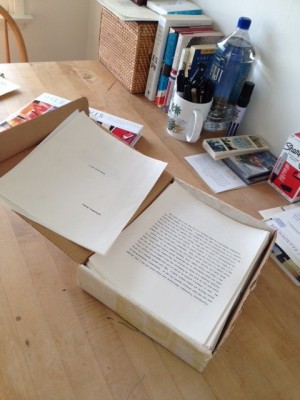 The next one, six years later, took about eighteen months full-time. That one I actually finished. Couldn’t find a publisher for it either.

The third one, three years after that, took about two and a half years and brought me to the point where I was seriously considering hanging myself. The only reason I didn’t was I couldn’t find a hook strong enough to hold me. That manuscript didn’t find a publisher either.

Was I discouraged? F*#k, yeah.

At that point I packed up and moved from New York to L.A., where I spent the next five years writing nine screenplays on spec (about six months each, working real jobs at the same time). None of these found a buyer either.

Yes, in many ways those years were as hard as they sound.

By that point I didn’t even have a dream. That was a good thing. I had given up on the fantasy that there was a brass ring, or a movie deal, or a rave review that was somehow going to change my life. I had found what I did, which was to sit at a keyboard beating my brains out, day after day, no matter what.

Nobody said this racket was easy. But that’s true of everything, isn’t it? Raising a child. Keeping a marriage together. Reinventing yourself when everything you went to school for falls apart.

My hat’s off to everyone who starts out with a dream and launches herself, in the face of adversity, into bringing that dream into reality.

I can’t prove it but I’ll bet that 99.99% of the men and women who read this blog fit into that category—and the other 00.01% do too but they just haven’t figured it out yet.

It’s mid-February now, the time when diets crash and gym memberships fade away. It gets easy, amid the snow and cold, to lose focus and start asking those questions that Resistance loves to hear rattling around in our heads.

Hang in there. I will if you will.

You might not realize it, but you’re getting better. Trust me. I know.