Starting research for The Lion’s Gate

Danny Grossman—Lou’s friend, a retired Israel Air Force lieutenant-colonel—has picked me up at Ben-Gurion Airport, gotten me checked in to my hotel. Danny’s going to be my guide and mentor. I’ve got my rental Toyota, had time to catch up on a little sleep, as well as wolf down some hummus, a couple of eggs and a salad.

We’re driving north on the freeway out of Tel Aviv. Tonight is my first interview. Danny has arranged an hour with Uzi Dayan, who is a neighbor from his community of Kochav Yair, about twenty minutes north of the city.

Uzi Dayan is Moshe Dayan’s nephew. He’s the son of Zorik Dayan, Moshe’s younger brother, who was killed fighting the Syrian Druze during Israel’s War of Independence in 1948.

Among many other posts, Uzi has commanded the Sayeret Matkal, Israel’s Special Forces.

As we drive, Danny points out several Arab towns visible a mile or so to the side of the highway. The villages are sprawling, prosperous-looking communities climbing rounded hillsides. You see domed roofs, satellite dishes, towers. “How can you tell an Arab village from an Israeli village?” Danny begins my education. “By the minarets.” 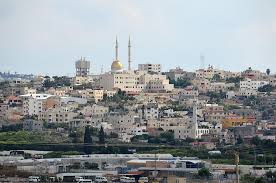 I had imagined that Arab villages would be off somewhere in the boonies or hundreds of miles away, beyond a border. Here they are within a few miles of Tel Aviv. Danny points ahead to a handsome, picturesque town on rising ground about a mile to the right of the highway.

In my reading, I have studied the notorious reprisal raid from the ’50s overseen personally by Moshe Dayan. A force of several thousand Israeli troops had crossed the border at night to assault and destroy a police fort in the Jordanian town of Kalkilya. The attack went awry. Arab Legion reinforcements flooded in. The action required desperate measures (and cost the reprisal force 18 killed and 68 wounded) before the Israelis got back across the border, barely beating the dawn.

The raid became famous because of how close it came to starting a war. Dayan had been minutes from calling in fighter planes and tanks to cover his troops’ withdrawal. If he had done so and the Jordanians had responded in kind, it could have touched off a conflagration.

“Wow, I had no idea Kalkilya was so close. I thought it would be a hundred miles away, somewhere in Jordan.”

We exit the highway at a place called Eyal, passing a kibbutz of well-ordered orange groves and irrigated fields. Danny points ahead. “That’s where I live. Kochav Yair.”

Kochav Yair is the absolute next town to Kalkilya. You can practically throw a stone from one to the other.

I’m thinking, Americans (including me) have no idea of the crazy-quilt geography of Israel.

Kalkiliya is 25 miles from Tel Aviv. It’s like coming upon the site of the battle of Little Big Horn—and discovering it’s in Scarsdale.

We drive into the upper middle-class community of Kochav Yair. A tree-lined entry leads into an American-style development with traffic circles and attractive colonies of contemporary houses.

“Before we go to Uzi’s,” Danny says, “I want to show you something.”

He directs me through darkening lanes to a hilltop rising maybe fifty feet above the valley. It’s evening. The sun has just set. We park in a dirt turnout along a street lined with construction sites for houses a-building.

“Let’s go up there to the overlook.”

The hillside community of Kochav Yair spreads directly beneath us. Pretty. Wooded. Population about 12,000.

The fields of Kalkilya lie about two hundred yards away. The town has been sealed off since 2003. There’s a crossing point, Danny says. Armed sentries of both sides man it.

“That was the armistice line before June 1967,” he says. “That was Jordan, right there.”

Danny directs my attention to the sunset. The afterglow over the Mediterranean is clearly visible. So are the lights of Tel Aviv directly beneath.

“How much,” Danny asks me, “do you know about artillery?”

“I know it can fire from here to there.”

We drive down the hill to take a look at the security fence. Danny shows me torn sections and weedy gaps broad enough for two men to walk through abreast. “It’s peaceful now,” he says, “so nobody’s too worried.”

We get back in the car.

“I just wanted you to get a feeling for the distances,” says Danny.