I’m in Paris now. I have flown here to interview Yosi Ben-Hanan. On the right is a photo of Yosi from the last day of the Six Day War. 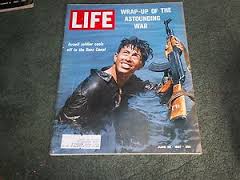 Lt. Yosi Ben-Hanan in the waters of the Suez Canal. Photo by Denis Cameron.

Six years after that moment, the armies of Egypt and Syria attacked Israel in what would become known as the Yom Kippur War. Yosi was in Nepal on his honeymoon. It took him seven different planes to get home. He arrived at the darkest hour of the crisis. Yosi took command of his tank battalion and led a counter-attack against overwhelming Syrian forces on the Golan Heights. For his heroism in this action, he was awarded the Itur HaOz, Israel’s second highest decoration for valor.

But this day in Paris, the world is a much more peaceful place. Yosi is a two-star general, head of the Israeli Defense Mission in Europe, on the brink of retirement. He meets Danny and me in his office in the Israeli Embassy and takes us to dinner at a restaurant called La Procope, where Voltaire dined.

Yosi is telling us about his mentor, Gen. Israel Tal.

A couple of years after the ’67 war I had left the army and traveled to New York City, to Life magazine. My dream was to become a photojournalist. Sure enough, Life offered me a job. But when I left the editor’s office and got back out on the sidewalk, I started to have a bad feeling. I put a dime in a pay phone and called home to Israel. I phoned Talik—this is General Tal’s nickname—collect.

He took the call. 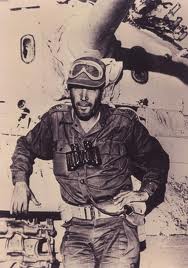 Gen. Israel Tal standing before an Israeli Merkava tank, which he designed.

Talik told me to come back to the army. That was where I belonged. He would make a place for me where I could do what I did best.

“Yosi, I am going to give you the address of the Israeli Defense Mission in Manhattan. It is thirty blocks south of where you are. Start walking now. When you get to the mission, an envelope with a thousand dollars in cash will be waiting for you. Use the money to fly home. Pay me back when you can. Oh, and one last thing: Lay over for a few days in London and Paris on the way. Have as much fun as you can, Yosi, because I am going to work you very hard when you get home.”

During the Six Day War, Yosi Ben-Hanan was a twenty-two-year-old lieutenant, the junior operations officer of the 7th Armored Brigade. This brigade was part of Gen. Tal’s division, whose orders were to attack and destroy the Egyptian army in the Sinai desert.

Twenty-four hours before the war, Tal gave a speech to his officers. This address is still quoted in Israel and excerpted in military journals and academies of war around the world. Tal’s words espouse the principle of aggressive action in the face of overwhelming odds and found this concept upon the Israeli notion of En Brera, “no alternative.”

Here is Yosi, describing the moment:

This was not General Patton mounting to a big stage. Talik is a little guy, but when he stands in front of a tank you know he can take it apart blindfolded and put it back together piece by piece. Tal has commanded the Armored Corps since 1964.

Talik tells us, his officers, that our battle plans are excellent and that he feels confident that we know them down to the smallest detail. But tomorrow when the war begins, those plans will fly out the window. Nothing, Tal says, will happen according to those plans. The lines of assault will change; the direction of the enemy’s movements will change. Everything will change.

“One thing must take place exactly as in the plans: the principle upon which these plans were founded. Every man will attack. Every unit will push forward as fast as it can. Pay no attention to your flanks. Give no thought to resupply. If you lose nine tanks out of ten, keep advancing with the tenth. Stop for nothing.”

Other nations can afford to lose the first battle, Talik says, and still recover and carry the day. This will not work for Israel. If we fail in the initial clash, our nation will be overrun. The fate of the war on the ground rests with what we in our division do tomorrow. The survival of our country depends upon us.

“Now I’m going to tell you something very severe. En brera. No alternative. The battle tomorrow will be life and death. Each man will assault to the end, taking no account of casualties. There will be no retreat. No halt, no hesitation. Only forward assault.”

Talik points on the map to El Arish, the main base of the Egyptian 7th Division. Tomorrow, he says, when things go wrong, remember this only:

“Keep moving toward El Arish. Get there at any cost. I will meet you there and shake your hand.”