To the Rue Cambon

“What is the answer for the individual who finds himself in diaspora?” asks Yosi.

“How does the stranger conduct himself in a strange land? Does he seek to efface his other-ness in an attempt to blend in with the dominant society? Does he change his name? Intermarry? Does he adopt the language, the ways, the religion of the culture in which he now resides?”

Yosi rides up front beside his driver, Koko, an infantry veteran of Israel’s crack Golani brigade, renowned for his courage, who has worked with Yosi throughout Yosi’s four-year stint as head of the Israeli Defense Mission in Europe. Yosi’s car, a 2009 Toyota Land Cruiser, progresses southeast along the Rue du Faubourg Saint-Honore in the direction of the Place Vendome. “Steve, how much do you know about the ‘Dreyfus Affair?'”

In the army of France in the 1890s was an officer of Jewish descent named Alfred Dreyfus. Dreyfus was wrongly convicted of treason and subjected to the most violent and despicable anti-Semitic attacks. Émile Zola wrote his famous editorial “J’Accuse” in Dreyfus’s defense in 1898. 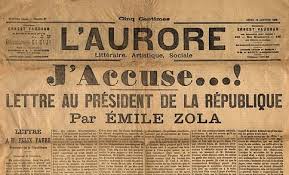 Theodor Herzl was a young secular Jewish reporter from Austria-Hungary assigned to cover Dreyfus’s trial. Herzl was appalled to hear the mob chanting, “Kill the Jews! Death to all Jews!”

That such hatred could exist in a cultured, civilized nation in which the Jewish community had thrived for centuries (and for which tens of thousands of Jewish soldiers had given their lives in France’s wars) signified to Herzl the futility of the notion of cultural assimilation.

If this could happen in a country as modern and liberal as France, Herzl concluded, it could happen anywhere.

He came to believe that “the Jewish problem” would never be resolved until the Jewish people left Europe and founded an independent nation of their own.

Our car passes the Église Notre-Dame-de-l’Assomption and turns into a quiet, prosperous-looking street called the Rue Cambon. We pass a Chanel boutique, which, Yosi informs us, is the original. Coco Chanel kept an apartment upstairs for years.

Our own Koko, Yosi’s driver, pulls the car over and parks outside No. 36 Rue Cambon, at what is today a StarHotel called the Castille. Yosi dismounts and motions us to follow.

Yosi indicates a marble plaque affixed to the wall above our heads. On it are carved these words, in French and Hebrew:

Here, in 1895, Theodor Herzl, founder of the Zionist movement, wrote The Jewish State, the prophetic work that foretold and announced the resurrection of the state of Israel. 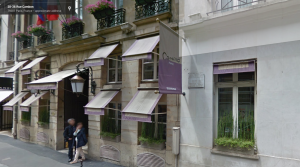 Outside No. 36 Rue Cambon. The Theodor Herzl plaque is visible on the wall in the right center of the photo.

The hair stands up on my neck.  I find myself thinking of the craziest thing. In my family is an artifact—a book of U.S. Navy Regulations—that belonged to my great-grandfather during the Civil War. My dad handed it down to me, and I have recently passed it on to my brother’s son Justin.

On the inside front cover is written in pen, in my grandfather’s longhand:

Changed name to Field during Civil War, then changed it back afterward.

My great-grandfather served on gunboats of the Union Navy on the Red River and the Arkansas River. What must that have been like—not as war but as American experience? If William Pretzfeld felt compelled to change his name to Field, he was obviously hiding the fact that he was a Jew.

Was it that bad?

How would his shipmates have acted had they known?

I’m thinking: This is not Germany or Russia or France. This is America.

My dad’s two older brothers graduated from Harvard. He, my father, was admitted to Brown in 1926 but dropped out before he had finished one semester. He would never talk about why, except to say that it had something to do with “anti-Semitism.” 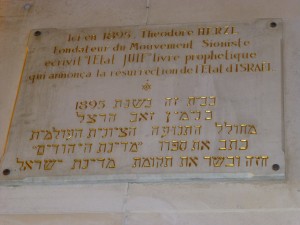 My father’s father, my grandfather, was sent from the States to secondary school in Prussia. The whole family spoke German. They thought of themselves not as Jewish-Americans but as German-Americans. The story of my dad dropping out of Brown, retold with amusement at many family gatherings, is that he waited till his own father had marched up the gangplank of an ocean liner bound for Europe (to which, in those days, there was no means of communication) before pulling the plug. When a letter from my dad finally caught up with his father, the old man is said to have cabled back:

Find a job before I return.

I ask Yosi if he takes many of his foreign guests, particularly Americans, to this spot on the rue Cambon to see Herzl’s plaque. He says yes.

“And how to they react?”

“It changes them,” Yosi says.

I feel it. It is changing me.