There are very few books on creativity that I would take with me to a desert island. One for sure is Patricia Ryan Madson’s Improv Wisdom, first published in 2005. 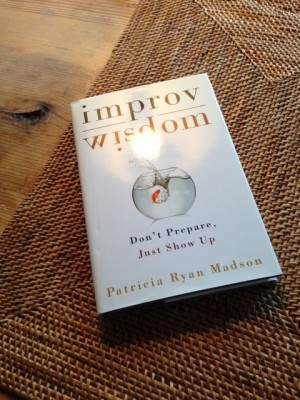 Patricia taught improvisation at Stanford to SRO classes for twenty-eight years. Her slender, highly concentrated book (shorter than The War of Art) cites thirteen maxims for aspiring comics and actors who dare to get up onstage without a net and wing it.

What is fascinating to me is that every one of these principles applies with equal power to writing, particularly fiction writing.

I had never heard this maxim before I read it in Patricia’s book, but it makes complete sense when you think about it. In improv, when your onstage partner throws you a line, what do you do? “Say yes,” says Patricia. Meaning go with it, build on it, take it to the next level.

When the answer to all questions is yes, you enter a new world, a world of action, possibility, and adventure.

The same principle applies to fiction writing. If a sentence or scene pops into your head, remember that it’s coming from your Big Improv Partner and that partner is your Muse, your unconscious, your better-and-smarter half. Don’t step on that impulse. Trust it. Run with it.

Did a new character suddenly appear? Someone you had not drafted into your original Dramatis Personae? Welcome her! Bring her into the family. Say yes.

I was working on The Lion’s Gate. I had 370 hours of interviews from Israel. I began transcribing them into files (i.e., “preparing.”) I thought I was being smart. I thought I was doing the responsible, professional historian thing.

What happened? I drove myself insane.

Finally one day I said to myself, “Screw it. Start the damn thing.”

Preparation and planning are vastly overrated in fiction writing and every other kind of creative enterprise. I don’t know George R.R. Martin but I’ll bet you a million bucks he didn’t string Game of Thrones together by painstakingly pinning 3X5 cards to a corkboard wall.

Showing up is 90% of the game. Put your ass where your heart wants to be. Sit down and tell the story. That’s improv, and it’s fiction (and non-fiction) writing too.

The professional improv actors of San Francisco’s 3 For All start each of their stories by asking for a simple suggestion from the audience. Quickly fielding a word or phrase from the chaos of shouts, Rafe, Tim, and Steve begin the scene without hesitation. They understand this vital improv principle: All starting points are equally valid.

It’s Einstein’s principle of relativity: all points in the universe are created equal. “There’s no need,” Patricia teaches, “to find the right starting place.”

My own version of this is “Start before you’re ready.” (Which is itself a steal from Patricia’s, “Don’t prepare, just show up.”)

The point is to get into the pool. Once you’re in the water, you’ll start to swim. It doesn’t matter where you dive from or jump from or cannonball from.

Another way to look at Patricia’s thirteen maxims is that they are all techniques for overcoming (or, better, sidestepping) Resistance.

“Just show up” gets you into the room, in front of the easel.

“Start anywhere” overcomes the tendency to perfectionism. It keeps you from dithering on the sidelines. It gets you into the swim.

It never ceases to amaze me how similar all forms of art are. The principles that work in dance apply just as powerfully to sculpture or software design. And what works onstage in improv clicks just as beautifully on the keyboard of your Mac.

Patricia Madson’s Improv Wisdom. I will have it with me on that desert island.