Why am I writing this blog? Why are you reading it? It’s not a bad idea to pause once in a while and ask questions like these. 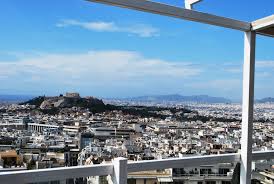 The Acropolis at Athens, seen from Mt. Lykabettos

The blog started about five years ago. It has evolved through a number of iterations. I’ve written in this space about what interests me, but I’ve also taken cues from comments and responses from readers and tried to dig deeper into issues that seemed to strike a chord.

What are we talking about on this blog? What’s our theme? What are we trying to get at, you and I?

I’m going to take the next few Wednesdays and attempt to answer that, at least from my own perspective.

What comes to mind at once is a thought from what to me is one of the seminal passages in the literature of Western civilization—Pericles’ Funeral Oration from Thucydides’ History of the Peloponnesian War (translation below by Rex Warner).

Once each year at Athens in the ancient days, the citizenry gathered, outdoors “in the most beautiful quarter outside the city walls,” to honor the fallen in battle from the previous twelve months. A citizen “chosen for his intellectual gifts and for his general reputation” delivered an address. This particular year, 431 BCE, that man was Pericles.

Pericles took the occasion—a critical one for the city because it was in the second year of a great and fateful war—to speak not just to honor the dead but to address the subject of Athens herself.

What made the city so great and powerful?

Why was Athens pre-eminent in all the world?

What were her beliefs and principles? What type of person was the typical Athenian?

Here is perhaps the most famous (and, to me, most significant) passage from Pericles’ oration:

Taking everything together then, I declare that our city is an education to Greece, and I declare that in my opinion each single one of our citizens, in all the manifold aspects of life, is able to show himself the rightful lord and owner of his own person, and to do this, moreover, with exceptional grace and exceptional versatility.

The rightful lord and owner of his own person. I don’t know if that thought had ever been uttered in any place other than Athens and the other Hellenic democracies. I’m not sure if any prior civilization had even deemed it an ideal worthy of aspiration. Earlier cultures had prized honor, strength, courage, piety, and other virtues. But individual autonomy? Wow, what a wild idea!

(Let’s leave aside for the moment the fact that women were largely excluded from political affairs in ancient Athens [though there were notable exceptions, as Pericles’ own consort, Aspasia]. Let’s say for argument’s sake that Pericles included all Athenians in this statement.)

That phrase—the rightful lord and owner of his own person—is to me the definition of the term “citizen” in the best and highest sense, as the Greeks conceived it and, in fact, invented it. The citizen as opposed to the subject, the slave, the courtier, the tribesman, or even the citizen in the Spartan sense, which was far more collective and which prized individual autonomy far less highly, if at all.

This, I think, is what we’re talking about on this blog.

The enemy, by this conception, is any force internal or external that would compel you or me to serve its ends and not our own. This conception also implies, as Pericles stated in a different part of his oration, that when free citizens pursue the callings of their own hearts in the proper civic spirit, their achievements redound not only to their own individual benefit but to the good of society as a whole.

Am I getting too heavy here? Bear with me a little please.

When we speak on this blog of identifying, confronting, and overcoming Resistance, we’re talking about becoming the rightful lords and owners of our own persons. When we talk about professionalism in our crafts and our lives (as opposed to amateurism), we’re addressing the same aim.

But our focus on this blog is personal, not political. The issues we’re addressing go deeper than the level of politics, i.e. becoming free from external oppression, tyranny, and intimidation. They go deeper than the corporate sphere, that is, emancipating ourselves from limits or circumscriptions imposed by those who hold economic power over us. Our aims are deeper than cultural oppression as well, meaning those societal forces that seek to produce conformity, obedience to the norm, etc.

We’re talking on this blog about overcoming internal oppression, tyranny, and intimidation. We’re talking about confronting sabotage from within. Our preoccupation here is with overcoming our own shadow tendencies toward laziness, timidity, procrastination, arrogance, pettiness, and lack of attention, clarity, and focus.

We’re talking about instilling in ourselves the capacities of self-motivation, self-discipline, self-validation, self-reinforcement. We’re talking about acquiring the ability to overcome distraction, superficiality, iconization of self and others, self-obsession, narcissism, and the myriad other self-generated vices that stop us from becoming our authentic selves and from doing our true work, whether that is personal, professional, whatever.

Again, in Pericles’ phrase, becoming “the rightful lords and owners of our own persons.”

This stuff, we gotta admit, is pretty high on the Maslow Pyramid. It’s heady material. It’s about self-realization and self-actualization, though not necessarily about “success” as the conventional culture defines it. You don’t have to be rich to be sovereign over your own person. You don’t have to have a New York Times bestseller or a startup you just sold to Google.

What we’re aspiring to, then, at least as the collective enterprise of this blog defines it, is individual autonomy in the highest and most moral sense. Which brings us to the next question: how does such freedom (and the power that comes with it) fit into the greater arc of our lives and the lives of our families? If we’re free to act, what actions should we take?

We’ll wade into that subject next Wednesday.