I was talking to a friend at the gym the other day. “How much strength do we all have?” he said. “Think about it: a ninety-five-pound mom can lift a Buick if her baby is underneath it, right? Then why is it so hard for that same woman to lift a 25-pound dumbbell here at the gym on a Tuesday morning?” 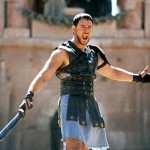 Russell Crowe in the arena in "Gladiator"

The answer, my friend said, is that the muscles can but they don’t want to. They resist. They’re afraid of success, afraid of failure, afraid of pain, afraid of the unknown.

“What we’re afraid of,” my friend said, “is going from using 14% of our potential to using 15%. For some reason, that increment is totally terrifying, even though there’s another 85% untouched beyond that.”

We can all agree, I’m sure, that we experience a huge rush of exhilaration when we actually do it.

Isn’t that what CrossFit is all about, or extreme sports, or any physical activity that pushes the body and the mind beyond their perceived limits? CrossFit, from what I’ve read, enlists camaraderie, competition, novelty (new exercises, new environments), games, challenges, etc. to inspire its members to go from 14% to 15%. Success becomes addictive. You do it once and you want to do it again.

Gravity doesn’t want us to fly. Death refuses to let us live forever. Fatigue conspires to keep us from true awakeness.

The ancient Greeks would describe these forms of resistance as “the jealousy of the gods.” The immortals possess certain powers and gifts, and they don’t like it when we mere humans aspire to them as well.

And yet we sense all the time, don’t we, that the gods also want us to go there? They want us to succeed. The spirit inside us drives us to go after that 1%. When we observe, even in animals, that push to exceed ourselves, don’t we perceive as well an element of nobility? We see it. It produces an emotion. A bull in a ring, an athlete on the track, a dancer onstage.

But they’ve taught themselves, one way or another, to advance into that zone.

That’s why they’re faster than we are, or stronger, or smarter or tougher.

There’s a scene in every gladiator movie ever made. The howling mob and the patrician spectators are seemingly on a higher social level than the warriors in the arena. The onlookers are free; the gladiators are captive. Yet always there’s a moment when through courage or will or endurance one of the men in the ring achieves a moment of nobility—and elevates himself in station, even if only for a single instant before his death, beyond those who are superficially his betters.

Which brings me back to what we were talking about last week—personal interior cultures.

Some grunt and groan; others make the act look effortless. Some do it with fireworks and histrionics; others pull it off with aplomb. Each has a different interior culture.

But the object of all these cultures is identical: