Writers are always obsessing about “narrative drive.” We know what it means. It’s the propulsive, page-turning momentum that we all hope to generate in our readers. 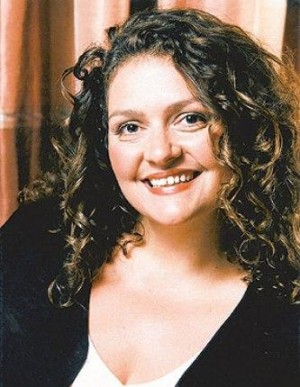 Aida Turturro as Janice on "The Sopranos"

But how do we create narrative drive?

A priest, a rabbi, and an alligator walk into a bar …

There’s no way you and I are not gonna stick around to hear the rest of that joke. Why? Because a question has been planted in our minds, an open-ended question that has hooked us and makes us want to know the answer. (By the way, I just invented that set-up; if an actual joke exists, I don’t know it. Sorry!)

I like to think of these narrative threads as “lines in the water.” Like a fishing boat will trail six, eight, ten different lines with eye-catching lures hoping to attract fish, we as writers will trail as many narrative lines as we think the story can handle.

The goal is identical: to “hook” the reader.

Last week I included the following section from the “Scene by Scene” file I’m working with on a book project right now. Note the word LINE throughout:

Breslin article prompts S to speculate on who planted it, who made it happen, and why now? LINE #6 and LINE #4. The fact alone that somebody made this happen shows that the stakes of LINE #6 are continuing to escalate. Now they’ve gone public. They’re in the paper.

What I’m doing in this file, among other things, is keeping track of the story’s “lines in the water.” First, I’m very consciously and deliberately opening up those lines. An early scene will plant an open-ended question in the reader’s mind. She, I hope, will keep turning the pages till she gets an answer.

I want to have as many lines as the story will hold and to keep each of them escalating all the time.

How many lines in the water does Game of Thrones have? Seems like a hundred, doesn’t it? No wonder we can’t stop watching.

Same with The Sopranos. Or Mad Men. Or House of Cards.

The idea is to hook the viewer with a slew of open-ended narrative streams, each one of which asks a compelling question. Will Carmela run away with Furio? Will Don Draper finally confront his hidden past? Will Francis ever pay for pushing Chloe in front of the subway train?

The more compelling the “lines,” the more deeply we in the audience will be hooked.

Here’s a trick that soap opera writers have been using for decades:

Give every character a story-line with every other character.

If we’ve got eight main characters, linking them can generate (theoretically) sixty-four lines. And that’s only counting binary relationships. We can also up the ante by introducing alliances and coalitions of characters and having each rival faction compete with every other. This is what Game of Thrones does so brilliantly. Then it goes itself one better by making the roster of these dueling cabals constantly shift and evolve.

Do you remember the character of Janice on The Sopranos? She was Tony’s hippie sister who had distanced herself from the family and fled to the West Coast. Consider the “lines” that series creator David Chase opened for himself when he brought Janice back to New Jersey.

First, Janice becomes involved with, then marries Richie Aprile, the loose-cannon gangster who’s a thorn in Tony’s side. Janice kills Richie with a pistol after he punches her at the dinner table. Tony and Christopher have to chop up and dispose of the body. (So far: Character A has been richly linked with Characters B, C, and D. And we haven’t even mentioned E, Carmela)

Then Janice takes up with Ralph Cifaretto (Tony winds up killing him with his bare hands), then she marries Bobby Baccalierri, while simultaneously conspiring against Tony to get her paws on their deceased mother Livia’s house and property. That’s F, G, and H. See what I mean? And Janice is only one character.

I know, I know, these are soap opera stunts and many of us like to think we would not stoop to such shenanigans. But this is story telling, and you and I are in the business of telling stories. These are the skills of the craft. Even if we elect not to exploit them shamelessly, we need to know what they are and we need to know how to use them.

But back to “Files I Work With.” Taking a page from Shawn’s The Story Grid, I will track each “line in the water” in my Scene by Scene file. (I probably should have a separate file for each, but I’m too lazy.) The questions I’ll ask myself as I survey each “line” are:

1. Is this story-line compelling? Will it hook the reader?

2. Is it on-theme? Am I reinforcing What The Story Is About? (If not, I’ll have to reconfigure or eliminate the story-line in question.)

3. Are the stakes escalating as the story progresses? Is the line becoming more interesting or is it starting to repeat itself?

4. Can I combine this line with any other line? Will that new double line help the global story?

I’m trying, as well, to keep as many lines alive as possible and to have as many as possible converge and pay off simultaneously in the climax.