Files I Work With, Part 2

We were talking a couple of weeks ago about my own idiosyncratic way of using the principles detailed in Shawn’s new book, THE STORY GRID. Specifically I mentioned five files that keep on my screen from Draft #2 onward.

I had a boss in advertising in New York when I was a copy cub. His name was Bob Froelich. He was in charge of a creative group of about ten people—five teams of copywriter and art director. If we were working on a group assignment (let’s say we were pitching Burger King or Seven-Up [which we seemed to be doing at least twice a year]), Bob would put us to work on our own for maybe a week. The assignment was always to come up with an overall campaign concept (e.g., “the Uncola” for Seven-Up) that could work in print and TV, then a specific pool of commercials (three or four to start), and a print component, i.e. magazine ads and outdoor billboards.

Each team would come up with three or four campaign concepts; then we’d all meet, pin our storyboards to the wall, and pitch them to the group. Bob would pick the finalists. Then we’d all go back to our cubicles and refine these. After two weeks, the group would focus down to, say, two campaigns. Meanwhile the other fifteen groups at the agency were doing the same thing, gearing up for the one big meeting in which the agency as a whole, under the senior creative director, would pick the two or three campaigns that eventually would be pitched to Burger King or Seven-Up.

After the second round, when our group was almost ready, Bob would call us together and have us pin our two finalist campaigns to the wall. Then he’d ask, “Okay. What’s missing missing missing?”

Invariably something was. Usually a pretty big something, if not two or three big somethings. Meaning we’d miscalculated in our rush to get the work done. Maybe one of the campaigns was inadvertently offensive to women. Maybe there was some glaring void in logic. Maybe one campaign was dependent on a single visual and couldn’t be “pooled out” into multiple ads or commercials.

We’d have to go back to the drawing board and fill those holes.

Okay. How does this work for writing a novel or a piece of long-form non-fiction?

This, remember, is the stage AFTER the First Draft. It’s the phase where we switch from our right brain—i.e. pure instinctive creativity, just blasting the story out—to our left brain, that is, conscious analysis, critical thinking, rational assessment.

In other words: editing.

Now we go back to our #2 file, Conventions of the Genre, and ask ourselves, “What conventions have we left out? Do we know? Can we do without them?” On a deeper level, we revisit the principles of storytelling and ask the same question. “What’s missing? Do we have three acts? Do we have a crisis, climax, and resolution? What are they? Do they work?”

Just as in Bob Froelich’s gang of Mad Men, I find today that there is always some huge glaring omission, if not two or three. It’s amazing.

Suppose we’re writing a thriller. We refer to Shawn’s conventions of that genre (or just to what we know from our own instincts and experience) and ask, “Do we have a Hero At The Mercy of the Villain Scene? Do all our plot complications escalate the stakes of the story? Is every scene on-theme?”

In other words, we’re editing our own work.

We’re doing what Shawn would do if he were our editor (or what any really good editor would do.)

We’re “putting the Story Grid on our story.”

That file is usually three or four pages long, single-spaced.

As I work on Drafts #2 through, say, #12, this file comprises my marching orders to myself.

I’m filling in the gaps.

I’m going back to all the hard spots that I avoided in my first draft for the sake of keeping momentum going. Now I’m addressing those thorny issues.

One “missing missing missing” category falls under the heading of Continuity, i.e. stuff that’s internally contradictory or just doesn’t make story sense—narrative glitches that the reader will respond to by thinking, “That’s crazy, that would never happen!” Or, “Hey, I thought the girl had a wooden left leg; now she’s got a titanium right leg!”

In the story I’m working on now, for example, I had a climax that required a gun. I had set up the gun early in the story, but then it got lost.

Note to self: “Fix the gun problem.”

Other problems might be thematic. I had a long section in the middle that was wobbling off-theme. It was rife with extraneous elements that were not in alignment with the global story’s theme.

Note to self: “Fix theme craziness in Act Two.”

In other words, these are the same notes that a good editor would have given me. Only I’m giving them to myself. I’m acting as my own editor.

Again, it’s incredible how easy it is to forget the absolute basics. It’s as though we’re designing the Golden Gate Bridge and we forget to include suspension cables.

Note to self: “Add suspension cables!”

Here’s one specific passage from the Missing Missing Missing file I’m working with right now. Maybe it won’t make complete sense here, without background and context. But hopefully this “peek under the hood” will provide a glimpse anyway, as an illustration of the idiosyncratic way that one writer works:

2c. Critically important that bond of friendship between S+B grow throughout the story. Go back scene by scene and make sure this is happening.

Then I have notes to myself of specific fixes, scene-by-scene.

2d. Reason for growing bond is S+B share parallel thematic obsessions: both are driven by guilt over crimes committed in the past and both are desperate to redeem themselves. (Parallel is Woody Allen character +  Martin Landau character in CRIMES AND MISDEMEANORS.) Make sure this obsession is the bond between S+B and nothing else. 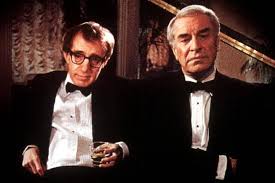 Woody Allen and Martin Landau in "Crimes and Misdemeanors"

Also VERY IMPORTANT; neither S nor B must realize the bond of friendship is growing. B believes he’s trying to exploit S; S knows he’s getting screwed but maintains relationship out of other reasons (or doesn’t even know why he’s doing it.)

2e. Make sure this buddy story follows conventions of Love Story, i.e. the two must meet cute, clash, “break up,” then come together in the end. Keep this as unconscious as possible for both. Go through scene by scene and make sure this is happening.

Again in the file, I write notes to myself citing specific scenes and specific fixes.

2f. Also S+B must have fundamental philosophical difference, like Hubbell+Katy in THE WAY WE WERE, that cannot be reconciled and that centers around the theme of crime and redemption, i.e. justice. Specifically S believes redemption is possible; B does not. MAKE CERTAIN we have a scene (possibly GUARD HILL ROAD) where S+B clash overtly on this issue. S makes his case, which B rejects; B states his position, which S rejects.

2g. Bond of friendship becomes overt in climax, but very important that resolution for both S+B individually is EXACT OPPOSITE of what each has expected and each believes, e.g. B DOES redeem himself, even though he believed this impossible; S realizes that he can’t redeem himself, but that B somehow has done it for him.

In other words, these are the notes that Shawn might give me, or a really good editor would give to a writer. They are Missing Missing Missing because the writer always misses what he’s writing about. In the story I’m citing here, the friendship between S and B is the absolutely critical component of the narrative. Yet I in writing the first couple of drafts had no idea this was true. I wasn’t even aware that there was a growing friendship. If Shawn had said to me, after reading Draft #1, “What about the growing bond between S and B?” I’d have looked at him blankly. “What bond?”

To repeat: it’s absolutely amazing what critical story components we can leave out, while remaining utterly clueless about them. Hence the file, Missing Missing Missing.

I hope citing my own story notes in this post is not too obscure. The gist, again, is self-editing. Writing the notes to ourselves on what we have inadvertently left out in our first couple of drafts, so that we can address these omissions and fix them in our post-First Draft work.

Next week, the third file: “Scene by Scene.”