With notable exceptions, just about any story that hopes to produce a powerful impact must build to a climax that strains everyday credulity. An astronaut makes it back safely from Mars, a seventy-year-old male intern saves a hip young female CEO, an outcast high school girl named Carrie immolates her tormenters with her telekinetic powers. 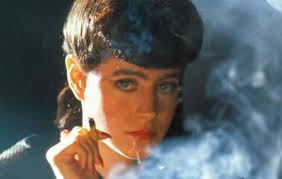 Sean Young as a replicant in “Blade Runner.” Do we buy in or not?

But how do you, the writer, get there?

How do you take your readers to that thermonuclear climax without overtaxing their willing suspension of disbelief?

We talked about one way a few weeks ago in a post called “Truth Truth Truth Fiction.” Here are two others.

In this technique, we escalate the pushing of the envelope so gradually and by such subtle increments that the reader either doesn’t realize what’s happening or does realize but, moment by moment, agrees to go along.

Just for fun, let’s make up an example out of thin air …

Chapter One: A nice young family moves into a house in the suburbs of Boston.

“Okay,” says the reader, “I believe that.” (Why not? There’s nothing yet that remotely strains credulity.)

In Chapter Two, every event remains equally plausible—the leaves on the sugar maples turning color, trick-or-treaters making their rounds on Halloween, the mulling of cider, the bobbing for apples. Except for one moment, as the young parents are carving a Jack-o’-lantern, when their four-year-old daughter thinks she hears a tiny voice cry out, “Ouch!” from the pumpkin. Mom and Dad calm their child, dismissing their daughter’s fright as the product of a little girl’s overactive imagination.

The reader thinks, “Okay, I’m not sure where this is going … but I’ll buy in, at least for this chapter.”

From Chapter Three onward, each scene and sequence asks the reader to accept a reality that is getting a teeny bit scarier and a smidgen more Stephen King-esque. The reader is the frog in the pot. With each chapter the temperature of the water rises oh-so-imperceptibly, until …

By the time we hit Chapter Twenty-Two, you the writer can have the earth cracking open and Satan shaking hands with Santa Claus and the reader will accept it.

That’s the Boiling A Frog Method.

From the first sentence or first frame of film, you the writer deliver such an outrageous mind-bending premise that you confront the reader with the choice of buy in or drop out.

“As Gregor Samsa awoke one morning from uneasy dreams he found himself transformed in his bed into a gigantic insect.”

“Early in the 21st Century, THE TYRELL CORPORATION advanced Robot evolution into the NEXUS phase—a being virtually identical to a human—known as a Replicant.”

This technique forces the reader to make a decision in the first five seconds of exposure to the premise. Is she on the bus or off? Of course the reader wants to be on. That’s why she bought the book or went to the movie.

She says to herself, “Okay, the guy wakes up as a cockroach … I accept that.”

You, the writer, are off to the races.