We as writers have been admonished a thousand times that a character must have an arc. 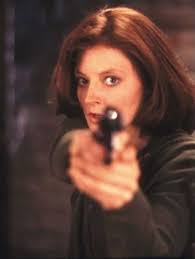 Jodie Foster as Clarice Starling in “The Silence of the Lambs.” Forgive me, Shawn, for borrowing your heroine.

For sure, our hero has to have one. She must change through the story. The more she changes, the better.

But change alone is not enough.

That movement has to be (you’re ahead of me, I know) on-theme.

The hero has to learn something through her suffering. But it’s more specific even than that. She has to advance and become more conscious not just in general or willy-nilly, but in line with what the story’s about.

What is a character’s arc anyway?

The term is well-chosen, I think, because of the image it evokes—that of a rising-and-descending trajectory from one side of a hemisphere to the other. West to east. 180 degrees.

An arc has symmetry. It doesn’t move randomly, but pole-to-pole. It transits from plus to minus (or vice versa). It produces a U-turn.

An arc is a hero’s journey in the sense that it “returns,” if not to where it started, then to the point directly across from that point of origin.

What happens along that arc?

What happens is suffering.

In The Silence of the Lambs (as Shawn has so meticulously and skillfully broken the narrative down for us in The Story Grid), Clarice Starling’s interior arc is one of disillusionment. She, the FBI trainee, starts out believing that the Bureau is fair and that the wider world is a level playing field. If she works hard and produces results, she believes, she will be rewarded. The system is honest, she believes.

By the end of the book Clarice has been betrayed by her boss, locked out by her superiors; she’s been fired, pulled off the Buffalo Bill case, cast into the outer darkness. That’s her suffering. She’s trying to save a young woman’s life (the latest kidnap victim, Catherine Martin, whom the psycho killer is about to murder and mutilate) and all the system does is ignore her, degrade her, and stand unfairly in her way.

And yet she prevails. On her own, employing only her own resources, Clarice locates the villain, enters his lair, and dispatches him. By her own wits and in the face of monumental adversity, she saves the damsel in distress.

So what is Clarice’s arc? What is her suffering? How does she change?

She changes on-theme. Her inner worldview goes from False (but Positive) Belief to Disillusionment, even Despair, to True (although Negative) Perception.

Is this an “unhappy” ending? Yeah, in the sense that Clarice finds herself at the end of the story without illusions, on her own, with no mentor, no sponsor, no organization to which to belong and no immediate hope of “advancement within the system.”

On the other hand, this clearing out of self-delusion has opened her to the possibility of true self-belief.

The best kind of suffering in a drama (or a comedy) is suffering brought on by the protagonist’s own original blindness. Why? Because that deficit of awareness carries with it a built-in hero’s journey and a made-to-order arc. Oedipus will go from his own arrogant hubris to full excruciating awareness of his crimes. Shane will progress from his dream of living a normal life to the realization that he can’t escape the weight of his gunslinging past.

The hero’s arc is the 180-degree trajectory of his or her suffering as he/she is compelled by events to perceive and to accept the truth.

This truth was present from the start or even before. Its location was at the pole opposite from the one at which the hero stands in the story’s opening.

That rejection, that blindness is the source of their suffering. And the source, in the end, of their painfully acquired wisdom.

The hero’s suffering produces elevation of consciousness. This is true in fiction and it’s true in real life.

That’s why we need suffering in our stories and why we as writers must have no reluctance about heaping it on our heroes.