How to Make Your Novel Universal

My answer will not surprise you.

Dana Wynter and Kevin McCarthy in “Invasion of the Body Snatchers”

Theme is what makes the specific universal.

Remember the first post in this series? I was relating a conversation with a friend who’s a literary agent in Hollywood. She represents screenwriters. She told me that she had read 500 screenplays in one year and couldn’t find a single one she wanted to represent. Why? “Because so many of them were not about anything.”

What she meant, in crassly commercial terms, was this:

One factor is theme. Why? Because theme makes the specific universal. Theme can take a slasher film or a cheesy detective story and make it pop. It can take a narrow, superspecific premise and make it irresistible to millions.

Consider Invasion of the Body Snatchers, from the 1955 novel by Jack Finney (who also wrote Assault on a Queen and Time and Again). If there ever was a low-budget “B” horror flick that seemed on the surface to be exactly like every other, this is it. But Body Snatchers became a cult phenomenon, spawning two remakes and endless movie-buff articles and tributes. To this day, it packs revival houses and produces late night fits of the munchies every time it appears on cable.

Yes, the actors (Kevin McCarthy and Dana Wynter among others) were terrific. Yeah, Don Siegel’s directing was spooky and paranoia-saturated, cinematography suitably creepy, the script crisp and crackling.

But the theme (and the levels of theme) was what made Invasion of the Body Snatchers universal. Remember the story? Evil spores from space land in Northern California. They grow, evolving into plant-like pods that become weird featureless doppelgangers of individual humans. When a human falls asleep, its pod takes over its body. Each new “recruit” joins the others in propagating the pods (and the pod people) worldwide.

What is the theme? What’s the movie about?

The theme is “If you sleep, you die.”

The movie is about coerced manipulation of consciousness. The Specific is alien entities taking over and inhabiting human beings by stealth, rendering these humans soulless, vacant—and creepily content. The Universal is we are all being brainwashed and we don’t know it.

The Age of Conformity.

Body Snatchers may have looked like a run-of-the-mill sci-fi freakout flick. But it was anything but. It was different from the others because its theme hit the sweet spot of unconscious paranoia in the era of Ozzie and Harriet and Ward and June Cleaver.

“OMG!”, viewers thought when they caught this feature at the drive-in, side by side with every other generic Chevy and Ford. “That’s my life! I feel like the pods are taking me over too!”

In ’93 The X-Files accomplished the same trick, using a slightly different theme of paranoia and conspiracy, and in ’99 The Matrix took the same theme and raised the ante one more time.

The key to these stories’ success was the universality of their themes.

Everyone could relate, even if they couldn’t articulate why. 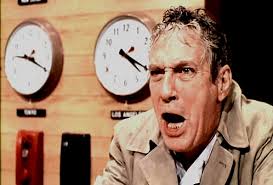 Paddy Chayefsky’s Network came out in 1976. (How about a shout-out, by the way, for the man who gave us not just three Oscar-winning scripts, but Chayefsky’s Rule of Theme?) Its narrative was of a TV conglomerate cynically and shamelessly pursuing ratings by turning its once-prestigious news division into a pandering-to-the-lowest-common-denominator laughingstock.

Its theme was selling your soul on every level.

In other words, a universal theme.

It’s an enlightening exercise to pick at random a handful of books or movies that have become runaway hits and ask yourself, “What’s the theme of each? No matter how insular or specific the subject matter, is the theme universal?”

Trust me, it will be.