Regular readers of our recent posts will know the answer to this cry for help already. 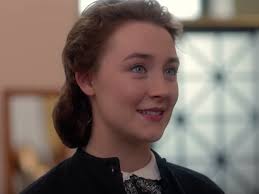 Theme is a golden highway to a great title.

Consider Brooklyn, starring Saoirse Ronan. The story is about a young Irish girl who emigrates from the Auld Sod in the early 50s and winds up in Brooklyn. After a period of struggle and assimilation she starts to find her way professionally, meets a wonderful young guy, accepts his proposal of marriage. Wow, things are going great!

A family tragedy compels her to return briefly to Ireland. Once there, her newfound American self-confidence makes her attractive to certain socially-connected individuals who might have overlooked her charms in the past. The next thing we know, our heroine is relapsing into her old, self-diminishing, allowing-herself-to-be-exploited ways. Another suitor proposes, she says yes … OMG, in the audience we’re cringing. No, Saoirse, don’t fall for it!

I won’t spoil the ending, if you haven’t seen the movie. Let’s ask instead, “What’s the theme? What is this story about?”

It’s about finding the courage to leave an old familiar world that, if we remain under its spell, will destroy our soul and our chance at self-actualization and happiness—and to venture forth (and make our home in) a new land, where true happiness and love are actually possible.

What is the name of that new land?

Another place-name that became an iconic title: Chinatown. Again because it’s on-theme.

The final line of the movie—“Forget it, Jake. It’s Chinatown.”—sums up all the corruption, cupidity, and just plain evil that lurk beneath the otherwise-attractive surface of things. In other words, the theme.

The story of an astronaut stranded on an alien orb could easily have been titled Marooned or Lost Among the Stars. What made The Martian an outstanding title (aside from its succinctness and provocativeness) was that it captured the novel’s theme—salvation comes from thinking like a whole different species of being.

Mud was a terrific title, as was Wild, The Boys in the Boat, Just Kids, not to mention The Big Short, Still Alice, Straight Outta Compton and of course Star Wars.

A great title (as Shawn wrote in his recent post, What’s in a Title?) has to hit a number of beats. It has to be provocative. It has to stop the reader and grab her interest. It has to be memorable and unique and it has to communicate the book or movie’s genre. If our novel is a love story, it can’t have a title that makes it sound like a mystery or a police procedural.

But an excellent way to start our search for a compelling title is to ask ourselves, “What is the book’s theme? What’s it about?”

With luck we might come up with Crime and Punishment or The Sun Also Rises, or even To Kill a Mockingbird.