A case could be made that many, many books and movies are about one thing and one thing only: getting Person X to say to Person Y, “I love you.” 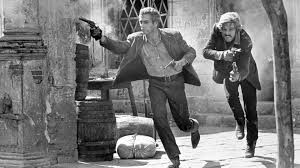 The trick is our characters can never use those blatant, overt words. That wouldn’t be cool.

It wouldn’t ring true to life.

And it wouldn’t possess the power and the impact we want.

In fiction, “I love you” has to come in subtext, not text.

Here’s one of the ways William Goldman did it in Butch Cassidy and the Sundance Kid.

It’s the final scene. The outlaws are shot up and bleeding in a cramped hideout in a town square somewhere in Bolivia. Surrounding them, outside, are hundreds of uniformed, rifle-toting Federales. The instant our two “bandidos yanquis” step out through the door … well, we all know what’s coming.

I got a great idea where we should go next.

Well I don’t wanna hear it.

You’ll change your mind once I tell you.

Australia. I figured secretly you wanted to know so I told you: Australia.

What’s so great about Australia?

They speak English there.

BUTCH tells Sundance about the banks, the beaches, and the women Down Under.

Aw, everythings’s always gotta be perfect with you.

I just don’t wanna get there and find out it stinks, that’s all.

In Billy Wilder’s The Apartment, junior exec Baxter (Jack Lemmon) has been in love with elevator operator Fran Kubelik (Shirley Maclaine) for the whole movie. But Shirley is blind to Jack’s infatuation. Instead she’s in a doomed affair with married exec Mr. Sheldrake (Fred McMurray). When Shirley tries to poison herself after Sheldrake dumps her, Jack saves her life by getting her stomach pumped and sitting up all night with her playing cards. Next day he stands up to Sheldrake (who’s his boss), quits his job, etc., all the while believing Shirley still has no romantic interest in him. 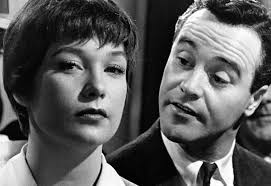 Shirley MacLaine and Jack Lemmon in “The Apartment”

In the final scene Shirley sees the light, races to Jack’s apartment just in time to catch him before he packs up and leaves town.

What’d you do with the cards?

Shirley gets the deck. sits beside Jack on the couch.

We’ll send him a fruitbcake every Christmas. Cut.

He cuts a deuce, she cuts a ten.

I love you, Miss Kubilek

Did you hear what I said, I absolutely adore you.

Shut up and deal. 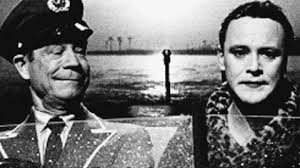 Joe E. Brown and Jack Lemmon in “Some Like It Hot”

Billy Wilder topped this of course with the last line of Some Like It Hot, when Jerry (Jack Lemmon), hiding out from the mob in drag with a girl band, explains to his zillionaire suitor Osgood Fielding III (Joe E. Brown) that he can’t marry him.