A Master Class with Shawn

There’s a term Shawn uses that I had never heard before:

(He claims proudly to be one himself.) 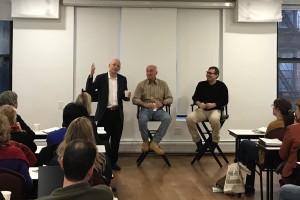 A story nerd, as I understand it, is someone who loves to get into the geeky details and “inside baseball” mechanics of storytelling. A story nerd knows what a Value Shift is. She’s intimate with concepts like “beats” and “reveals.” She knows the Five Commandments of Storytelling. A story nerd is kinda like a Trekkie except she doesn’t wear Vulcan ears or appear in public dressed as a Klingon.

Me, I’d use a different term:

Anyway, there were about forty of us story nerds/professional writers gathered in Soho in New York this February for a three-day Story Grid event starring my partner, Shawn Coyne. (If you weren’t there, don’t worry. A 10-hour plus set of tapes will be available soon.)

For three all-day sessions Shawn broke down Jane Austen’s Pride and Prejudice into its constituent elements and put them all back together again.

He was teaching us how to write a love story.

[By the way, you can order Shawn’s paperback breakdown of P&P here.]

Shawn took us through the saga of Mr. Darcy and Elizabeth Bennet, Mr. Collins, Lydia, and Lady Catherine. He showed us why P&P still sells 400,000 copies a year, 204 years after it was published. 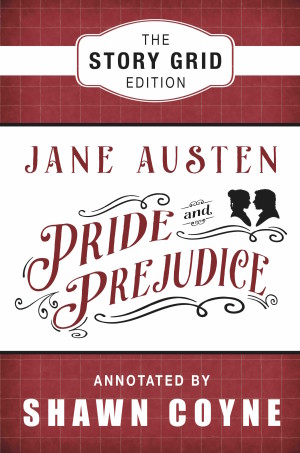 I was there. Seth Godin showed up. We had a great Q&A on Day Three.

And we all came away with notebooks groaning from everything we had learned listening to Shawn.

(Click here for Shawn’s free mini-course on How to Outline a Novel. Or, as he subtitles it, “How to turn a 50,000-word problem into 266 bite-sized challenges.”)

In these three lessons [Shawn says] I teach how to tackle a huge problem—figuring out how to write a new novel. By using examples including my inadequacies assembling an above ground pool for my kids, seminal Parkinson’s disease research, and the classic Knock Knock Banana joke, I’ll break down the 50,000-word goal into manageable units of story assembly. To top it off, at the end of the course, I’ll give you a scene-by-scene spreadsheet template to track your progress. Micro-step by micro-step, you’ll build your next novel in 30 days. Plan the work…and then work the plan!

But back to Shawn’s New York event.

It was his first. He had never done this before. I flew in for moral support—and because after all these years I remain fascinated by how a big-time editor dissects and analyzes a story, how he assesses what works and what doesn’t work, and how he figures out how to fix it.

I had expected the audience to be young writers, or artists in other fields just starting out. I was wildly wrong. The average age of the attendees was (I’m guessing) around forty. Several were in their sixties. A number were published authors. Everyone I talked to was an honest-to-God story nerd. They were deep into their first or sixth or seventeenth novel. They knew their stuff and they wanted to learn more.

They took the game seriously.

They were in it for keeps.

It was pretty cool to see the desks spread with laptops and notebooks and hear the really smart questions being asked. You could see as Shawn elucidated each storytelling principle that the attending writers were incorporating it on the spot into their own works in progress.

I was doing the same.

I had more than one “Aha!” or “Holy sh*t!” moment when I found myself furiously scribbling notes to myself. “Go back to Chapter X and fix such-and-such.”

As I said, this February get-together was dedicated to the genre of Love Story only. But Shawn is planning a series of such events for all the other genres, including nonfiction. (Yes, the principles of storytelling apply to “true” material too.)

If you’re not yet a subscriber to Shawn’s site, www.storygrid.com, I highly recommend that you sign up ASAP.

And click the link above for his free mini-course on story outlining.

I’ve already clicked it myself.