Report from the Trenches, #4

What exactly am I doing as I reconceive/reconstruct/rewrite a project that I’m already eighteen months into, based on some pretty stark “do it over” notes from Shawn? 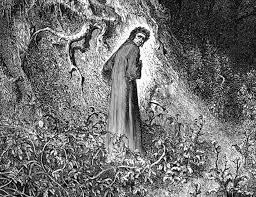 Dante in a dark wood. “Didn’t we pass that same tree half an hour ago?”

I mean, what specifically?

What am I actually doing?

Answer: I’m doing what I should have done the first time.

I’m doing what I’ve told myself to do a hundred times but somehow didn’t do.

I failed to do these things because I was

Is this sort of thing new to me?

When I first gave Gates of Fire to my then-agent, Sterling Lord, it was 800 pages long. He said, “I can’t submit this unless you cut 300 pages.” That took me six months. It was hell.

On Tides of War, Shawn sent me back to the drawing board for nine months. That was hell times two.

Even The War of Art had to be chopped up, re-organized, and redone.

The writing biz is like being the mother of fifteen kids. You can’t let yourself get pregnant again until enough time has passed that you forget how painful labor was the last time.

So what exactly am I doing now as I work through the current tear-it-down-and-do-it-again scenario?

I’m going back to fundamentals.

To what I didn’t do well enough the first time.

I’m asking myself the questions all of us writers of fiction (and nonfiction) have to ask and answer:

Shawn’s notes have been a huge help because he has pointed out places where my original half-assed answers were wrong.

I wasn’t working in the genre I thought I was working in.

I really couldn’t define the theme.

My conception of the hero was incomplete.

Same, even more so, with the villain.

At least one big supporting character (Rachel, see last week’s post) was working at cross-purposes to the story.

Almost all of these mistakes and omissions and incompletions were the result of me not working hard enough, not pushing hard enough into the unknown.

How am I trying to fix them?

(Again, each project presents different problems, lessons don’t necessarily carry over from one to another, and I may very well screw this one up again.)

First, the architectural decisions, as delineated above. In other words, what we as writers might call our Outline.

Our index cards that we pin to the wall.

The undergirding structural components of the story.

And second, the actual STORY.

Meaning HOW do we actually erect, dress up, and paint all those architectural girders and crossbeams?

What does the hero of this story (Manning, see last week) want? He wants to solve the case, to defeat the villain, to save the world. Okay, I have to ask myself, how does he express this? In what actual scenes? With what actual dialogue? In what actual order?

And, oh yeah I realize, what Manning really wants is to find meaning in his life. How is THAT expressed in the story? Is there a specific scene? The climax? Does someone address this overtly? Who? How? When? Does it come entirely through action without words? How? By whom? When?

The reason I titled my two story files for this re-working “Freewheelin'” and “Spitballin'” is I want to get at these answers by play, not by work.

In the files I’m basically talking to myself. “What would happen if Manning didn’t know X in Chapter Seven, instead of the way I have it now where he does know? What would he do under these new circumstances?”

Ooh, a car chase! That might work. Manning chases Bad Guy X into New Environment Y and, in a twist at the end, the Bad Guy tells him “Q didn’t kill Z, H did.”

(In other words, I’m basically writing the whole damn thing over, twisting it this way and that in the hope that it’ll contort itself into what it really wants to be.)

When Shawn applies his Story Grid analysis to a completed manuscript that a writer has submitted to him, he goes scene-by-scene, like a movie or stage director. He asks of each scene, “What is the inciting incident? What are the progressive complications? What’s the climax?” He asks, like an actor, “What does Character X want in this scene? What obstacles stand in her way? What does Character Y want in this scene? Do X and Y clash? Do the scene’s stakes escalate? How has the story advanced, or twisted, from the beginning of this scene to the end?”

I was lazy the first time through this story.

I winged it too much.

I didn’t ask and answer all the questions I had to.

It’s hard to go back and do what you didn’t do the first time. It’s like you’re in a dark forest and you’ve just walked past the same tree for the third time.

Are we getting anywhere?

Or are we just getting more lost?

Nobody said this shit was easy.