The Difference Between Heroes and Villains

We’ve seen in prior posts that villain and hero are often opposite sides of the same coin. 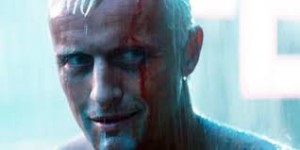 Villain or hero? Rutger Hauer as Roy Batty in the 1978 “Blade Runner”

Does this mean the Good Guy and the Bad Guy are equivalent?

Is the hero really no “better” than the heavy; he just happens to believe something different?

What separates the Good Guy from the Bad Guy (at least some of the time) is the Good Guy is capable of sacrificing himself for the good of others.

In fact, the climax of many great stories is exactly that.

Bogey puts Ingrid on the plane to Lisbon.

Huck Finn tears up the letter that he believes will save himself while condemning his friend Jim.

The 300 Spartans die to the last man at Thermopylae.

There are exceptions. “The Guru” (Eduardo Cianelli) in Gunga Din, knowing he can’t escape his captors, steps to brink of the pit of vipers and turns back to face the three British sergeants (Cary Grant, Victor McLaglen, and Douglas Fairbanks, Jr.)

You have sworn to give your lives if necessary for your country, which is England. Well, India is my country, and I can die for it as readily as you can for yours.

And he leaps into the pit.

Which makes us think, “Hmm, maybe the Guru is not the villain after all. Could the villain be England’s unjust colonial domination of India?”

Another seeming villain who sacrifices himself is Roy Batty (Rutger Hauer), the replicant leader in the 1978 Blade Runner. Roy’s choice in the climax on the rooftop of the Bradbury Building is to save the man who is trying to kill him, Blade Runner Rick Deckard (Harrison Ford) while he himself expires of the wound he knows is mortal. [P.S. Here’s the story of Rutger Hauer changing the dialogue the night before the scene was shot.]

I’ve seen things you people wouldn’t believe. Attack ships on fire off the shoulder of Orion. I watched C-beams glitter in the dark near the Tannhäuser Gate. All those moments will be lost in time, like tears in rain. Time to die.

That’s not a villain speech, is it? It’s a hero speech. It tells us (though the filmmakers themselves may not have realized this at the time) that the villain in Blade Runner is not Roy or his fellow replicants Pris (Daryl Hannah), Leon (Brion James) and Zhora (Joanna Cassidy), whose only aim is to survive the four-year life span they’ve been doomed to by their creators, but the idea of manufacturing human-like slaves in the first place. In other words, the villain is Mr. Eldon Tyrell of the Tyrell Corporation—and all those who went along with this concept.

The Seven Samurai are willing to give their lives for the villagers.

Sydney Carton takes Edward Darnay’s place beneath the guillotine in A Tale of Two Cities.

The hero is capable of the ultimate sacrifice.