Ask Yourself, "What Does the Villain Want?"

For James Bond villains, the answer is easy: world domination. 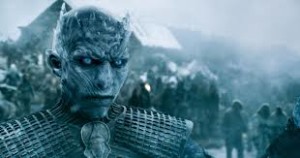 The Night King and the Army of the Dead. When we know what these suckers want, we can write the next season of “Game of Thrones”

Here are a few others:

If you’re keeping score, the answers to the above (among others) are 1. All zombie stories, 2. Hannibal Lecter, 3. The shark, the Alien, the Thing, etc., 4. the Body Snatchers, 5. the devil in The Exorcist.

Why is Hillary Clinton such an inexhaustible object of hate to the Right? Because she, in their view, wants all five of the above.

(For the same notion from the Left, see Donald Trump.)

The hero’s “want” often changes over the course of the story. She may start out in Act One wanting her marriage to succeed, only to evolve by the end of Act Three into wanting to come into her own as an individual.

But the villain’s “want” remains the same from start to finish.

Be able to articulate it in one sentence or less.

Then build your story around it.

If we know what the Army of the Dead want, we know what our heroes in Game of Thrones’ next season are up against and what they have to do to combat it.