Blake Snyder on Ins and Outs

Here’s a quick In and Out from Good Will Hunting, i.e. the opening and closing images from the film. 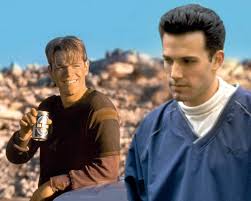 Matt Damon and Ben Affleck from “Good Will Hunting”

Chuckie (Ben Affleck) drives his beat-up sedan down a residential alley and pulls up behind the ramshackle South Boston house where his buddy Will Hunting (Matt Damon) lives. Chuckie is picking up Will to take him to work. Clearly Chuckie has made this trip every day for years and expects to do it for decades into the future. Chuckie trots up the steps to the back door, knocks, Will answers and off they go.

Chuckie drives the same junker down the same alley at the same morning hour and stops behind the same house. Chuckie trots up the steps to the back door and knocks, but Will is no longer there.

Final cut to Will’s own equally-decrepit beater (with Will driving) accelerating down the highway toward California.

Even if you haven’t seen a frame of the movie except these Ins and Outs, you get a pretty good sense of what the story is about—and how the hero (Shane, Ripley, Will) has changed from the beginning of the tale to the end.

Here’s Blake Snyder from Save the Cat!:

The opening image is also an opportunity to give us the starting point of the hero. It gives us a moment to see a ‘before’ snapshot of the guy or gal or group of people we are about to follow on this adventure we’re all going to take. Presumably, if the screenwriter has done his job, there will also be an ‘after’ snapshot to show how things have changed … a matching beat: the final image. These are bookends. And because a good screenplay is about change, these two scenes are a way to make clear how that change takes place in your movie. The opening and final images should be opposites, a plus and a minus, showing change so dramatic it documents the emotional upheaval that the movie represents. Often actors will only read the first and last ten pages of a script to see if that drastic change is in there, and see if it’s intriguing. If you don’t show that change, the script is often tossed across the room into the ‘Reject’ file.

We’ve been using movies as examples so far in this series. But novels and plays and even non-fiction can and should follow the same storytelling principles when it comes to Opening Statements and Closing Statements. The difference is a literary work may not necessarily start and end with a visual image. A film, of course, has no choice.

Happy families are all alike; every unhappy family is unhappy in its own way.

If you really want to hear about it, the first thing you’ll probably want to know is where I was born, and what my lousy childhood was like, and how my parents were occupied and all before they had me, and all that David Copperfield kind of crap, but I don’t feel like going into it, if you want to know the truth.

In the beginning God created the heavens and the Earth.

Nonetheless it behooves us, brothers and sisters, whether we’re screenwriters or novelists or entrepreneurs or doctoral candidates, to ask ourselves (and to answer) …

Does our Opening resonate with our Closing like Shane, like Alien, like Good Will Hunting? Has real change occurred (for our central character or for our argument or our thesis) from the one to the other? Is our Out as far away, emotionally and narratively, as it can possibly be from our In?