In the movie biz, there’s a question that studios and development companies often put to any screenplay they’re evaluating:

What they mean is, “What is this script’s opening image and closing image? Do the two work together? Are they cohesive? Are they on-theme? Are they are far apart emotionally as possible?” 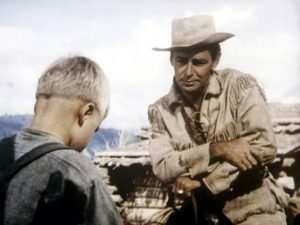 This is a really helpful series of questions for any creative person who’s trying to evaluate his or her own work. I use it all the time.

These questions help if you’re designing a restaurant, writing a Ph.D. dissertation, crafting a speech for a corporate audience. They help for music, for dance, for art, for photography.

And they help for fiction and nonfiction.

The classic Hollywood example of a great “in” and an even greater “out” comes from the 1953 Western, Shane, starring Alan Ladd, Van Heflin, Jean Arthur, Brandon deWilde and Jack Palance, directed by George Stevens and written by A.B. Guthrie, Jr. and Jack Sher from Sher’s 1949 novel (that he wrote as Jack Schaefer.)

A lone rider (Alan Ladd) descends from a mountain pass into a gorgeous Wyoming valley, circa 1870. In the audience we can tell from the rider’s fringed buckskin jacket, from his horse’s silver trimmed bridle, and from the six-gun on his hip that he is not your ordinary cowpuncher.

The camera cuts ahead to a small ranch-a-building (apparently a sodbuster’s claim), where a tow-headed boy of six named Joey (Brandon deWilde), looks up and sees the rider approaching. Even at a distance the horseman cuts a figure of romance—and the boy responds to it.

The same lone rider now exits the valley. It’s night. He’s been wounded, shot in the side after gunning down the three prime Bad Guys (including Jack Palance as the archetypal black-hatted gunslinger, Wilson), who were “putting the run on” the honest, hard-working sodbusters.

Shane clearly doesn’t want to leave. He is compelled by his own fate.

Joey, there’s no living with a killing. There’s no going back from it. Right or wrong, it’s a brand. A brand sticks.

But, Shane, we want you! Mother wants you, I know she does!

Shane tousles Joey’s hair in farewell. He rides out of the valley, the exact way he came.

Even if we know nothing of what came between these two scenes (by which I mean the entire body of the movie), we get a pretty good sense of the narrative just from this “in” and this “out.”

If you’re designing a restaurant, what’s the first impression people get when they enter? What’s the last thing they see when they leave?

What’s the first song on your album? What’s the last?

[We’ll get into this subject of “ins” and “outs” a little deeper over the next few weeks.]

BTW, Shane was picked by the American Film Institute as the #3 US Western of all time, behind The Searchers and High Noon.

Myself, I would put it at Number One.