Ins and Outs in a Love Story

Remember The Way We Were, the 1973 blockbuster starring-vehicle for Barbra Streisand and Robert Redford? The theme song, sung by Babs, won an Oscar; the film itself was rated by AFI as #6 on the list of Greatest Love Stories of All Time. 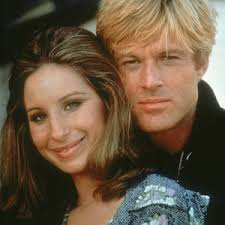 But let’s focus, you and I, on the THEME and how it is expressed in the Opening and Closing Images. Remember our third rule of In and Outs Club:

The opening and closing images must be on-theme.

The In to The Way We Were is the titles sequence. It’s a montage of quick scenes of students at a college, apparently somewhere in the East, just before the U.S. entered World War II.

The sequence introduces us to Katie Morosky (Streisand) and Hubbell Gardiner (Redford), both students at this college. We see Hubbell sprinting in a track meet, throwing the javelin, pulling campus pranks, dating gorgeous cheerleaders. Clearly he is the Golden Youth, a carefree got-it-made All-American boy.

Katie? Not so much. We see her passionately demonstrating against fascism (of the Spanish Civil War), working at the campus malt shop, mimeographing radical literature, studying hard and holding down half a dozen part-time jobs. Katie is clearly the Campus Commie, a curly-maned Jewish girl either literally from Brooklyn or from some Brooklyn of the mind.

What has this In told us?

Since the movie is titled The Way We Were (emphasis on “were”), we in the audience can make a pretty good guess that …

Katie and Hubbell will somehow fall in love.

Their love will be special in a way that is political and moral as well as romantic.

Their love will be doomed.

The lovers are clearly opposites, not just ethnically but politically and perhaps morally as well. These factors will be, we suspect, what draws Katie and Hubbell together … and ultimately, we fear, what will tear them apart.

We may also surmise, from the era in which the story is set, that Katie and Hubbell’s romantic trajectory will parallel and be a metaphor for the American political narrative of the war and the postwar.

If we were forced to make a guess at the movie’s theme based exclusively on the In, we might venture something like

Two opposite Americas will unite passionately and with great hope for the future and then, with painful regret, revert to their previous antithetical state.

Now let’s turn to the Out.

Remember our first two rules of Ins and Outs Club.

The opening and closing images should resonate with one another. They should look as alike as we can make them within reason.

But at the same time, our In and Out should be as far apart emotionally and narratively as possible, to show how much the hero (or heroes) have changed.

The Closing Scene of The Way We Were takes place outside the Plaza Hotel in New York City. We see Katie, twenty or thirty years older and looking in-her-leftish-radical-element as a native New Yorker, crossing toward the hotel from the fountain that fronts Fifth Avenue.

Suddenly Katie draws up. She has spotted Hubbell. He is exiting the hotel with his attractive blonde wife. From Katie’s reaction we realize this sighting is a complete surprise—and more, that Katie probably hasn’t seen Hubbell in years. Both Hubbell and his wife are impeccably attired in prosperous-looking, conventional business-type suits. A doorman has hailed them a taxi; they’re about to step aboard.

The moment when Katie spots Hubbell outside the Plaza Hotel

Hubbell sees Katie now. She is smiling and crossing toward him. She comes up. Hubbell and Katie embrace as Hubbell’s wife looks on. It’s a polite, non-passionate clutch. Katie and Hubbell exchange forced pleasantries. Hubbell reveals that he’s writing for a TV show now. Katie smiles bravely, but clearly with disappointment for Hubbell. She declares she is married and doing fine.

The only David X. Cohen in the phone book.

The only David X. Cohen in the book.

Katie breaks off this painful encounter with a smile and a wave. She trots across the plaza to a row of tables set up on the sidewalk. These are manned by politically-active-looking matrons and plastered with BAN THE BOMB placards. Katie checks in with one of the ladies and picks up a sheaf of pamphlets, ready to take her shift as a demonstrator.

Hubbell moves into frame. He has crossed alone from the taxi stand. Hubbell indicates the literature in Katie’s hand.

You never give up, do you?

Only when I’m absolutely forced to.

The lovers embrace a second time. This time each hangs onto the other. The poignancy of the moment is clear. When the pair separates, Hubbell asks about their daughter. “She’s beautiful,” says Katie. “You’d be so proud of her.” Katie invites Hubbell to come with his wife to join her and her husband for dinner.

The lovers part for the final time.

The film now cuts to Katie in “long shot,” in front of the Plaza, holding up her anti-war pamphlets …

Ban the Bomb! Take a stand for Peace Now!

See how this ending adheres to our three principles of Ins and Outs?

The Out is a visual bookend for the In. Katie protesting on campus, Katie advocating for peace on Fifth Avenue. Hubbell riding his golden birthright at college, Hubbell cruising the path-of-not-so-great-resistance into an affluent-but-unsatisfying sunset.

At the same time, the Out is as far away emotionally and narratively from the In as possible. One is a set-up for a great love about to happen; the other is the excruciating knell of its finish.

Love alone does not conquer all. Some gulfs are too wide to bridge.

Is this not just Katie and Hubbell’s story, but America’s as well?

The great love/union-of-opposites that was waiting to happen in the Opening has had its run, failed, and been extinguished by the Close.

Even if we don’t know the middle of the story (of the Hollywood Ten, HUAC, McCarthyism, of Jews and Gentiles and principled resistance) we get the essence of this tragic love story just from the In and the Out.

Oddly enough (or maybe not so oddly), the arc of The Way We Were is almost identical to that of The Godfather and of Shane, two other movies we’ve cited in this series. In all three films, the protagonists enter the narrative believing they can change their lives and alter the order of their universes. In all three, by story’s end the heroes realize they can’t. Of the films we’ve talked about in this series, only Good Will Hunting has a “happy” Out. It’s the only one in which the characters’ world actually changes.