This is an interesting concept that has carry-overs for us in the fiction world. Nonfiction too. 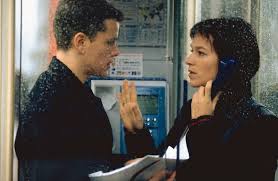 The “A” story is the main story, the story in the foreground.

In Moby Dick the “A” story is Ahab’s pursuit of the whale. In The Bourne Identity, it’s Jason Bourne’s search for who he really is. In To Kill a Mockingbird it’s Atticus Finch’s endeavor to save Tom Robinson.

The “B” story is the secondary story, the story in the background.

In many dramas, the “B” story is the love story.

In The Bourne Identity for example, the “B” story is the romance that develops between Jason Bourne (Matt Damon) and Marie Kreutz (Franka Potente) as Bourne flees from the bad guys and pursues his quest to find his lost identity.

In Moby Dick, the love story is between Ishmael and Queequeg the harpooneer. Remember Chapter Three at the Spouter Inn in New Bedford, where Ishmael is compelled by the scarcity of beds to share a (chaste) bunk with Queequeg? In the final scene of the saga, after Moby Dick has attacked and sunk the Pequod, Ishmael alone survives, using as a life raft the watertight coffin that Queequeg had had made for himself by the ship’s carpenter when he had a premonition of his coming death

In To Kill a Mockingbird, the “B” love story is between Scout (or, we might say, Scout and Jem together) and Boo Radley. Again, this is not a literal love story but a tale of the heart just the same.

Blake Snyder in his indispensable book on screenwriting, Save the Cat!, declares that the “B” story often rides to the rescue of the “A” story.

This happens at the start of Act Three, when “A” and “B” story merge in what I call the Epiphanal Moment. (More on this later.)

For sure, the “B” story resonates with and often completes the “A” story.

In The Imitation Game, the “B” story is between Alan Turing (Benedict Cumberbatch) and Joan Clarke (Keira Knightley), both mathematicians working to crack the German “Enigma” code for the Brits during WWII. In the climax, when Turing is destroyed physically and emotionally by his own homophobic and spectacularly ingrateful government, it is Joan’s love for and dedication to his memory that saves the tale and completes it. 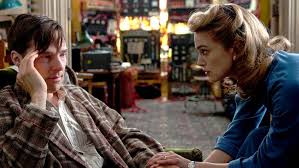 Benedict Cumberbatch and Keira Knightley in “The Imitation Game”

One of the tests I apply to my own stories is to ask of myself, as I’m working:

Do they resonate with one another? Are they both on-theme?

Does the “B” story complete or save or resolve the “A” story?

And this crucual question:

The amazing thing, I’ve discovered, is that a “B” story seems to arise all by itself without me even thinking about it.

Maybe the overall narrative simply cries out for it and I find myself supplying it without any planning or pre-intention.

It’s an illuminating exercise for all of us, when we read books or watch movies that we consider to be truly working, to ask ourselves, “What’s the ‘A’ story here? What’s the ‘B’ story? How do they interact? How does one enhance the other?”

We’ll continue this investigation next week … and thereafter.